It was a very enjoyable weekend, though from now on trips to Aldeburgh will be nostalgia-filled. The festival has moved from the High Street to the shopping mall.  Sonofabook /Charles Boyle has written very pertinently but sympathetically about what it was like, and festival lifespans in general.

Ko Un created Aldeburgh Moments whenever he appeared.  Saying in his Q&A, if things aren’t good enough in here, go and look at the reeds and the tears will start to flow. Taking a slug of red wine and giving us a song. Talking about losing half his generation…  HALF HIS GENERATION in the Korean war, from which time, he said, he’s been inhabited by a lament for the dead, who sometimes are the ones who write. Not talking much about being in prison; not talking at all about trying to commit suicide, or putting acid in his ears to block out the ‘noise’ of the world. How could those things be talked about? That’s all in the Poetry Paper, in a piece by Brother Anthony of Taizé, his main translator. The two of them read together at the main Sunday reading. Ko Un applauded Brother Anthony each time he read out a translation, so we started doing the same; after a few times, Brother Anthony, his modesty increasingly outraged, gently brushed away the applause…

Ko Un’s reading style was full of loud/soft drama – Korean style, maybe? It helped communicate the emotion in a language impenetrable to almost everyone there, and keep us listening.  At one point he leant right in to the microphone to deliver three lines or phrases in a row that all began with P, reminding us that P is a plosive.

Do I have the love of one person
that can wash away the hatred of several people?
I had been opening an umbrella,
but I closed it again,
and just welcomed the rain.

A first look at First Person Sorrowful, the Bloodaxe volume (translated by Brother Anthony and Lee Sang-Wha) that was launched at the festival, confirms the sense from Ko Un’s reading that his poetry is hugely varied – political, metaphysical, mystical, human, lyrical, quirky, funny.  And this book only covers the last ten years of his life-as-a-poet, which started before the Korean War. Teenager Ko Un was walking home along a country road (in our village all we did was work, eat and sleep, he said) and found a discarded book of poems written, it turned out, by a leper-poet. He spent the night reading it. He felt it was meant for him, and decided to write like the poet, about things that related to his own life.

I was going to write about this year’s Aldeburgh Moments, but Ko Un has run away with me. Maybe next time.

Back to Aldeburgh/Snape. One of the weekend’s low points was when, through some intangible combination of circumstances, Snape became a term of abuse. It can be hissed very nicely: Snape, Snape, Ssssnape!

“Me, I think they should have stayed in Aldeburgh, and fixed the roof” says Charles Boyle – exactly. That’s what lots of us thought. But I don’t think they were given a choice. Not that any of the Poetry Trust staff or volunteers would ever say so, they are all far too professional – and so kind, hospitable, intelligent and helpful as always. And they had organised things extremely well which must be difficult in a new venue.

The Snape venues were all lovely.  If only one could lift them up and plonk them down in Aldeburgh, without their corporate and commercial carapace or their indifferent eating places. The river and marshland is beautiful, but it’s not the sea, the sea, the sea, which breathed in and out all night through the attic window as I lay awake in Aldeburgh (Aldeburgh syndrome = over-excitement leading to sleeplessness).

The thing that annoys me most is that the festival now discriminates against those without cars. It is un-green. No grant-administrating bureaucrat can deny that this is a backward step. I’m sure they’ll adapt the shuttle bus arrangements next year, but that won’t address the principle, or solve the practical problems.

These include having to plan for the whole day, and not being able to go back to one’s accommodation for a quiet hour or two. Not being able to browse the High Street for cafes, friends and shops (Aldeburgh businesses can’t be pleased). I had damp feet the whole weekend, because of going for a walk at Snape each morning between the bus arriving and my first event. I also spent Sunday in dirty jeans as I slipped in the mud! though that was quite funny, unlike the damp feet. Wellies next year, and a bag to carry stuff around. A friend wanted somewhere quiet to write/think, but there wasn’t anywhere under cover – hopeless.

One friend suggested there should be a boat service up the river, from Aldeburgh to Snape. Brilliant. If you agree and were there, put it in your feedback survey!

I know I wasn’t the only person who didn’t use all my tickets because I needed to escape Snape. Next year I’ll go, barring disasters, but book fewer tickets, allowing plenty of time for Aldeburgh. 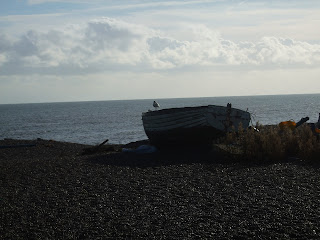