In praise of an unlikely poem

I’ve been rereading Wild Reckoning since quoting from it in my last post - the anthology inspired by Rachel Carson’s Silent Spring, edited by Maurice Riordan and John Burnside.  It’s a commonplace that a pleasure of poetry anthologies is discovering poems one would never have read otherwise.  A variation on this is the discovery of poems one would never have considered reading.  This one is by Joseph Campbell.  The title is Latin for ‘To the Threshold’.

The ewes and lambs, loving the far hillplaces,
Cropping by choice the succulent tops of heather,
Drinking the pure water of cloudborn lochlands,
Resting under erratics fostered with Abel –
Come to my haggard gate, my very doorstep.

The birds of freest will and strongest wingbeat,
Sad curlew, garrulous stonechat, hawk and coaltit,
Haunting lone bog or scalp or broken ruin,
Poising the rough thrust of air’s excesses –
Come to my haggard gate, my very doorstep.

The trout in the river, below the hanging marllot,
Swift, with ancestral fear of hook and shadow,
The elvers of cold drain and slough, remembering
The warm tangles of Caribbee and Sargasso –
Come to my haggard gate, my very doorstep.

Even the stoats and rats, who know a possessor
Of the rare sixth sense, the bardic insight,
Match, and more, for their devilish perversions,
And the deer, shyest of shy at autumn rutting –
Come to my haggard gate, my very doorstep.

Am I not a lucky man, trusted, Franciscan,
That these spacious things, gentle or hostile,
Following God’s urge, denying their nature,
Harbingers of high thoughts and fathers of poems –
Come to my haggard gate, my very doorstep.

It’s the rhythm that makes this poem, a strong five-beat rhythm that prevails despite many oddities of stress.  It gives a rugged feel (to go with “haggard”) and sends us lurching through the rough landscape that’s invoked.  Every line thumps to its end in a trochee.  Despite the title there are few Latinate words.  The author was a Gaelic speaker interested in Irish folklore and I wonder how much the rhythm and other aspects of this poem take from that.

I’m up high with the sheep straight off, and the birds, and down with the elvers in their cold drain.  Relishable, now-unthinkable phrases such as “cloudborn lochlands” and “poising the rough thrust of air’s excesses” somehow create a space, a landscape in which others such as “sad curlew” become acceptable. (“Marllot”, by the way, isn’t in the Shorter OED; I assume it’s a lot of land whose soil is marl.  And I think the Abel reference must be to his job as a shepherd.)

This magical space seems to dissolve in the last two verses, and I can’t defend the shy deer or the second last line of the poem.  But I like the way that the refrain can be either a summons or a statement, until the last verse; and the speaker’s wild-man / St Francis persona.  By invoking the various creatures, “spacious things” in their landscape, he celebrates them all – and draws the reader in with the beat of the words.

Alongside all this, I like it that the poem challenges my deeply contemporary tastes and prejudices.

“Prolific poet and committed republican” is how Joseph Campbell is summarised in his short page on culturenorthernireland.org.  “His several volumes of poems have not worn well”, says ulsterhistory.co.uk.  He was born in Belfast in 1879, took part in the Easter rising and was on the Republican side in the Irish civil war, moved to the US after being interned, and finally “lived in seclusion at a farmstead in Glencree, Co Wicklow, until his death” in 1944.

Wild Reckoning doesn’t have notes on poets and doesn’t credit any particular collection for ‘Ad Limina’ or give a date.  No link for the anthology, because it’s not easily available.  There are a few used copies from sellers via Amazon for around £25… and one new copy, for £3,878.39 (plus £2.80 postage).  How on earth…?
Posted by Fiona Moore at 22:19 4 comments: 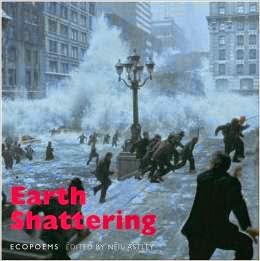