Aldeburgh: highs, lows and the spine of a poem 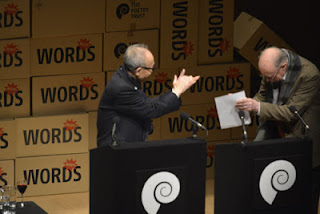 I wrote about Ko Un last time. Above is a photo of him and his translator Brother Anthony. All photos are by Peter Everard Smith.

Aldeburgh is history by now, two weeks ago. I‘m going to write a little more about it anyway... know I should have done so earlier, but haven’t had time.  Now it’s a gorgeous Sunday morning, I’ve cleaned the house (well, some of it) and swept leaves up (some of them).  The midday sun is coming in low through the window, making hollyhock seed-head and vine-leaf shadows on the wall.
One of the Highs was also a Low, and took place at the end of the Masterclass, the annual on-stage workshop, which I enjoyed all the more as an audience member because I was in it last year. There were three very interesting poems, and the usual perceptive audience participation. Sponsor Michael Mackmin of The Rialto magazine stood up to thank Michael Laskey (who was on stage as he chairs the Masterclass) and Joanna Cutts for all those years of editing Smiths Knoll. I was so pleased he did this; everyone was lamenting SK’s demise in the café and the corridors, and it was good to have an occasion to applaud them both.  Which we all did, at length. Anthony Wilson’s blog has a very good account of why.

The reeds at Snape, rustling and rattling.

Julia Copus’ talk on the spine of a poem – extremely cogent, though I wanted to argue with her proposition. This was summed up in a quote from Philip Larkin, on Thomas Hardy (I’m not sure if this is verbatim, but it’s close): “Each poem has a little spinal cord of thought”.

The spine, said Copus, can be built entirely of images, and doesn’t need to be verbalised.  The spine is there as thought associated with the images.  She referred to Wittgenstein’s duck/rabbit drawing, which can’t be seen as both at once, but when looking at it as, say, a duck, you have the idea of the rabbit in mind too.

Or the spine can be explicit.  Copus quoted John Donne: working on the poem’s frame is like the beating-out of a piece of gold, but the last clause is as a stamp upon the gold.  And Robert Frost: “A poem begins in delight and ends in wisdom”.

Copus used two examples.  Larkin’s ‘The Mower’ is structured as a narrative, with the central thought in the last two lines (like the final couplet in a Shakespeare sonnet). Once one has read to the end, the description and narrative in the rest of the poem become images of that final thought.  Sharon Olds’ ‘My Son the Man’ consists of a chain of Houdini-related images of confinement.

Copus gave us some words from three poems, and asked us to vote on which one of the three was by a beginner. Most of us got it right…  Anyway, I wanted to argue with the spine theory not because I don’t think it’s a very useful way of analysing a poem, or critiquing one’s own or other people’s drafts – I do think this – but because (a) I don’t like Poetry Rules, and (b) it seems to exclude experimental poetry, and probably some not-so-experimental poetry too. A poem may not want to have a spine at all; or it may want to have a different shape, instead of a line or concatenation; or it may want a broken spine.

Walks on the beach at Aldeburgh.

Brother Anthony of Taizé’s talk on Korean poetry, which included some beautiful quotations.  One was about the sky reflected in a bunch of grapes, but I’ve lost it.

There were more.  And I missed some; I didn’t go to so many events this year.

One aspect of the Anthony Thwaite / Christopher Reid discussion on poets whose work they can’t be without. They name-checked many poets, going back in time and from Serbia to Brazil (Andrade, who sounds well worth exploring). They probably thought they’d been wide-ranging. But one barrier was higher than Mount Everest and beyond all considerations of time… they didn’t mention a single female poet! Depressing, but not surprising – a reminder that there are still some for whom the canon is all male.