In praise of StAnza; Carolyn Forché in praise of the festival. Cleaning 100 baths. Eider ducks

Sunday, the last day: sunshine on bare branches and gulls’ wings, dark blue sea.  Blossom coming out in the Byre’s outer yard.  The sound of suitcases being wheeled over the bumpy thresholds of events.

One nice thing about the end of festivals is that everyone can thank the people who made them happen…  Massive applause in the theatre after the final reading with Bill Manhire and Sinéad Morrissey (which deserves a word like ‘intimate’ but less clichéd); and flowers for director Eleanor Livingstone. Correction: these were not handed over by her predecessor Brian Johnstone, whose grand white twirly moustache had illuminated the venues, but by chair of StAnza trustees Colin Will whose bardic white beard had done the same. My apologies to both.    Brian Johnstone was sitting near me, but that doesn't explain it.

The staff and student volunteers were lovely: cheerful, friendly, calm, helpful and tactful (kind to latecomers!)  They projected a sense of enjoyment.  StAnza trustees were there in quiet support, chairing the events while modestly not introducing themselves.  I am very grateful to one of them for exercising judgement in favour of two or three of us who queued for non-existent returns at a certain door...

As for Eleanor...  She’d been working flat out, of course – sending pre-festival emails at all hours of the night.  One wouldn’t have guessed; she was such a welcoming host, appearing everywhere and with a word for everyone.  She’d commissioned me to blog about StAnza.  I felt guilty about taking any time when she had dozens of poets to deal with but she made it seem no bother.  StAnza treats its people well.

Not long before the festival, having just read an email from Eleanor, I was cleaning the bathroom [worst domestic task]... thinking, Would I rather be doing this or in the final stages of directing a poetry festival?  The festival won.  But if I were in the last stages of directing the festival, which would I rather do?  Quite possibly cleaning the bath.  So I said this in my reply, and Eleanor said: “Most days at the moment I’d take cleaning a hundred baths over this.”  But then she went on to talk about the buzz in the StAnza office with full team and dozens of student volunteers, and how wonderful the book display looked in J&G Innes…

I’m on the train to London as I write this (Monday).  Until Newcastle, Carolyn Forché was on it too – in a post-StAnza glow, despite an ankle sprain from St Andrews cobbles and a broken suitcase wrapped papoose-like in brown sticky tape.  I asked her for StAnza impressions.  She said it was one of the most wonderful festivals she’d been to.  She and several others had felt they’d read their best, drawn out by an audience invisible in the dark auditorium but palpably listening and enjoying.  The quality of participants and audiences was high; the festival was very well organised, hospitable and serious, energetic and relaxed, with a lot of kindness.  She had great regard for Eleanor.  At the workshop she’d led, every poem was publishable [but who would not bring their best to her?]

I didn’t ask her where she got the luminous blue shoe-laces that glowed during her reading.  Or many other things.  I got her excited about the train going over the river in Newcastle – only to find out that the view happens after the station, where she got off.

At each StAnza event the chair reminded us to switch off our mobile phones and fill in the questionnaire: important for the future well-being of the festival, financial and otherwise.  I was hoping someone would ask us to fill in our phones and switch off the questionnaire...  Which I completed too late – in the bar after that final reading. So I left the box for further comments blank, being poetried out and half brain dead by then but alive enough to think, The blog’s for this.

The festival’s sense of community was one best thing – the overlapping circles of connection, the friendliness and openness.  People were very supportive of StAnza.

I loved the Byre Theatre as a venue, despite Alice Notley saying she couldn’t see the audience and looking a little concerned (after which they apparently lit us up a bit, though we didn’t notice).  The memorable readings would have been so anyway, but the theatre’s steeply raked space intensified that.  Carolyn Forché and Kei Miller have been named by just about everyone I’ve asked, What did you like best?  For their poetry and presence.  In their very different ways both have honey-and-lemon, charm-and-edge voices; they read with passion.

Miller gets the best-dressed poet prize for his reading outfit: heather cords and matching cap, a waistcoat the silvery-black of some local sand and a shirt that dazzled white under the spotlights.  But the undressed-upness of some readers was good too – no festival dress code.

For me and some others Alice Notley’s reading and Round Table interview were memorable too – what are festivals for, if not to introduce audiences to writers they might find challenging and hard to access?  Eleanor Livingstone invited her after hearing her read in Berlin.  StAnza’s Round Table events with an audience of a dozen or so are kept small on purpose – and the festival has resisted what must be a temptation to make them inaccessibly expensive.

Elsewhere, Ilya Kaminsky’s reading stood out – it’s great that small UK publisher Arc has taken him on and I hope he becomes a best seller for them.

I liked the mid-afternoon programming of events that mixed poetry with spectacle and music.  The Different Trains performance and Claire Trévien’s Shipwrecked House were both highlights at the Byre.

I liked the festival routine of starting the day with a Poetry Café Breakfast panel discussion in the comfortable and light Studio Theatre, and agreed with the various people who’d recommended Past & Present sessions – a mix of discussion and poems, and enthusiasm shared.

Out of all the events I went to, only a handful didn’t engage me.

Then there were the things I missed. Performance poet Toby Campion, talent-spotted by Eleanor at a slam.  Allison McVety’s reading – I’m enjoying her recent book Lighthouses.  Past & Present on the new Penguin Russian anthology; and on Scoto-Latin poets.  Writing Motherhood with Kathryn Maris and Carolyn Jess-Cooke.  I suppose annoying programme clashes indicate a good festival; so does the pang of hearing other people enthuse about an event.  I snatched 10 minutes at the book fair, only open for a few hours, but managed longer in the wonderful new Toppings bookshop.

My main regret is the people I missed or spent too little time with, and the people I might have met but didn’t because I was too busy going to events and writing.  Next visit…

The last thing is the hardest to fit into a comments box.  Before StAnza I stayed in Crail further south on the Fife coast and explored the coast path.

I was walking in bright weather – the early March sun turning everything gold or blue or green – and through a very strong wind with snow in its teeth. There were small flocks of eider ducks everywhere, bobbing roundly on the waves.  The drakes are so handsome, a black-and-white geometric design contrasting with their curves and their delicate flushes of pink and pale green. Designer birds, perhaps by Yves St-Laurent.  Sometimes they rear half-out of the water and puff out their pinkish chests.  The females, eclipsed but elegant in tweed, look mildly impressed.  When they’re swimming further out in choppy water, eiders crane their necks (nice to be able to use that word about a bird, however uncrane-like) and their silhouette changes.

There were lots of wader birds. A thing about them is the way they sometimes stand statue-still on rocks or sand, all facing in the same direction as if posing for a soft furnishing design. Here it was grey/brown tweed redshanks (red legs and bill), black/white oyster-catchers (pink and orange) and tweed-patterned curlews (grey-green).  Cormorants stood in a line on rocks offshore, hanging their wings out to dry; gulls caught the sun in their wings. Turnstones pecked around the edges of things.  There were rust-headed widgeon and dark velvet scoter ducks.  And swimming close to shore in a rock-sheltered inlet was a male red-breasted merganser, a large slightly grebe-shaped drake with a striking black-and-white design and rusty breast against the steely blue water, and a mohican ruffle down the back of its dark green head.  I think there was a pair of them too, far out to sea.

So I’ll remember StAnza for what it was like to listen to poems containing sea- and shore-scapes superimposed on the Fife coast-scape that was briefly my own and in my mind’s eye all week. 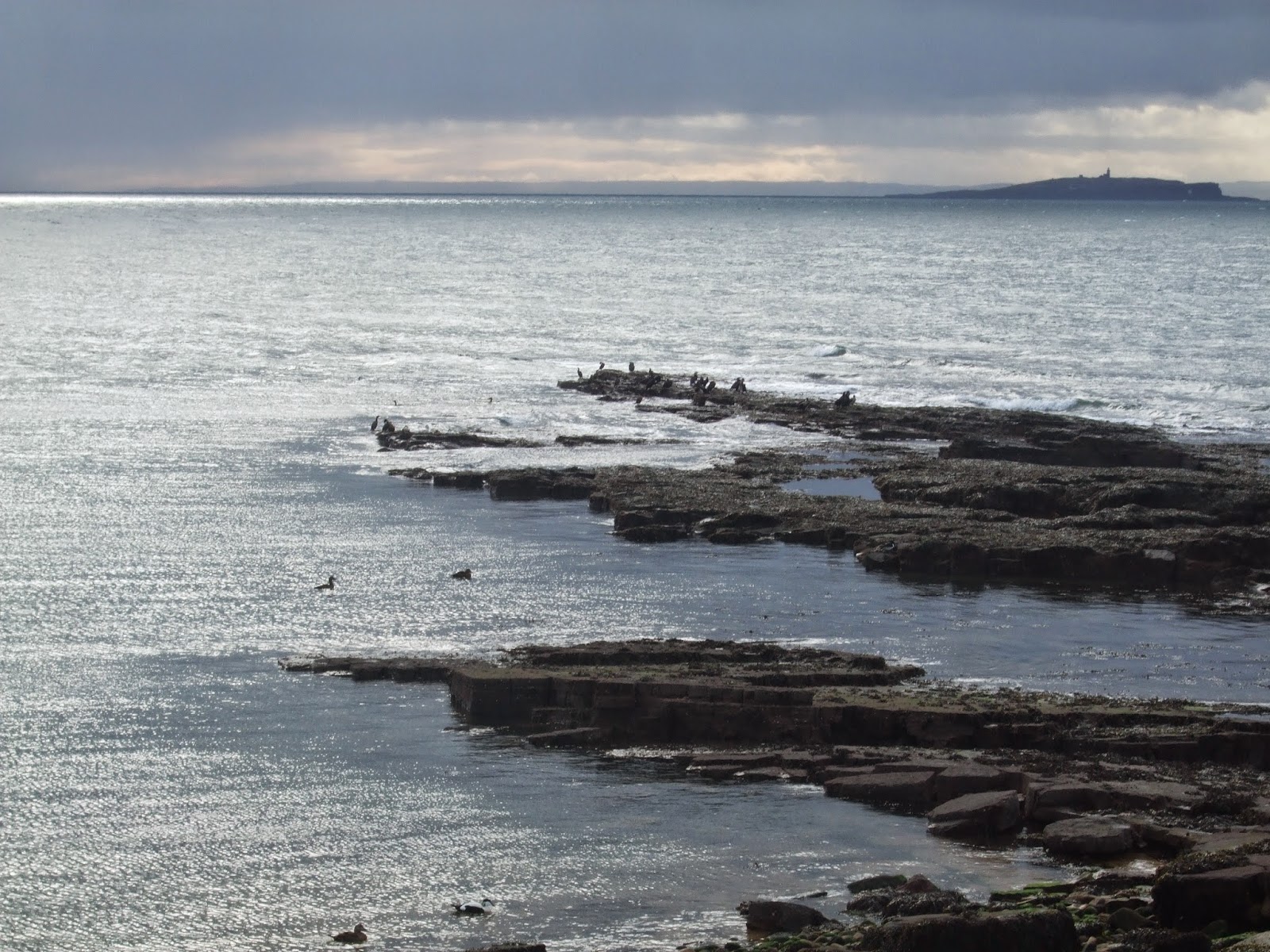