There’s an irresistibly obvious metaphor for what’s happened in Aldeburgh.  A phoenix chick emerged last year from the crash-and-burn ashes of the international festival.  Now the chick has fledged, showing off some fiery feathers.

It’s 3 weeks since the festival, too late for blogging really.  And I knew many of the participants which makes it awkward.  Anyway here’s what’s stayed in my mind.

***Mimi Khalvati standing in a brick niche outside the Jubilee Hall for a pre-reading smoke, her silver hair pouring down over a gold silk top: our furtive saint.  As Poetry School co-founder she led a 20th birthday event with three star pupils, Edward Doegar, Hannah Lowe and Karen McCarthy Woolf.  All four did each other proud; it was lovely to sense such strong personal relationships on stage. When Ed read Mimi’s sonnet ‘Overblown Roses’ I thought she / all of us would cry. It starts with a child and her mother and moves with the metaphor of the roses:

I suddenly saw afresh
the rose now, the rose ahead: where a petal
clings to a last breath…

At the end, someone asked those in the hall who’d been taught by Mimi to stand up and many of us did.  When people write PhDs etc on poetic influences of the last 20 years in Britain she will get her own chapter. 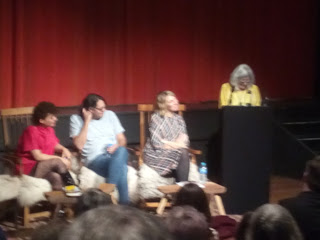 ***Ishion Hutchinson’s workshop on imitation in poetry, in a Sunday morning sun-filled gallery: from Ben Jonson to current plagiarism controversies to a translation of the mid-20th century Greek poet George Seferis.  It was very good to hear Hutchinson support imitation and the “rich harmony of implications” it can offer – when it’s not plagiarism or mockery or otherwise in bad faith.   And to discover another Seferis fan who probably made conversions that morning.  The poem he looked at was ‘Upon a Line of Foreign Verse’ translated (here, in Poetry) by A E Stallings. I’m used to the Keeley & Sherrard parallel text edition of Seferis.  Strangely, he isn’t a difficult poet to translate, and anyway K&S make it look easy.  But it was a delight to read another translator, and such a good one. It starts:

Happy is he who has made the journey of Odysseus. Happy if, as
the journey loomed,
He felt the sturdy rigging of a love, stretched taut inside his body
like the veins where the blood booms,

Of a love with unbroken rhythm, invincible as music and undying,
because it was born when we were born, and whether it dies when
we do, we do not know, and it is no use trying.

God help me to say, in a moment of great joy, what is this love?
I sit sometimes surrounded by an alien land, and I hear its distant
roar, like the boom of the sea mingled with an inexplicable
whirlwind from above.

It was also a pleasure to discover Ishion Hutchinson’s poetry.  If there’s a Seferis / Derek Walcott link – the sea, myth, wandering and exile, and something about the style – there’s a Hutchinson connection to both of them: his new book, House of Lords and Commons, shares these preoccupations in richly worded poems and he shares Walcott’s Caribbean roots.  ‘The Orator’ begins:

Amid a ratcheted, alloyed ghost,
I returned stares in the blackout
that clogged the podium where a bore
was harping in dead metaphor
the horror of colonial heritage.
I sank in the dark, haemorrhaged.
There I remembered the peninsula
of my sea, the breeze opening the water
to no book but dusk; no electricity,
just stars pulsing over shanties,
and, later, an inextinguishable moon,
invisible in this dark NYC room, 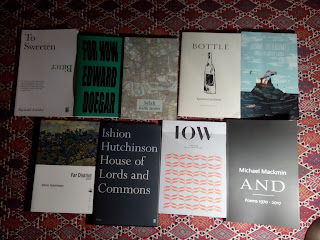 ***Along with Mimi’s reading, this one was memorable: Raymond Antrobus / Keith Jarrett / Rachel Long who filled the Jubilee Hall with energy and rhetoric.  See here for a resonant poem of Antrobus’ about Gaudí’s cathedral, sound, deafness and much else.  Jarrett can rhyme as fast and beguilingly in French as English and switch from North London to broad Caribbean and back in an instant.  This link’s to a video because listening to him is so enjoyable.  I went off with books by both of them; Long doesn’t have one yet but surely will do soon.  She writes tough and precise poems.  Here are some lines from one called ‘Translating Hemispheres #2’

I’m thinking of Baudelaire, of hair skating on thin air between swimmer’s shoulders

I am almost boy. Will he recognize me more?  Once I tried to hold his voice, but it slipped

through ‘pianist’ fingers. If only I had learnt to play.

I took measurements of his sleeping face, his waking, his soft and angry face,

all his faces.  Except the one I never saw because he was all back and no back – ever.

***The Resurgence Prize winners’ reading, which far exceeded my low expectations.  Eco-poetry is hard to write well – as one of the judges Mina Gorji and Lavinia Greenlaw said, we don’t seem to have found the vocabulary for what is happening perhaps because we can’t grasp it – but the three finalists’ poems (online here together with some excellent runners-up) are all very striking.

***HappenStance launch: two pamphlets, Lois Williams’ Like other animals (with some lovely exact turns of phrase) and Ramona Herdman’s Bottle (whose theme of family alcoholism clearly intrigued the audience – a near-taboo subject?); and And, Michael Mackmin’s first full collection for nearly 50 years.  All three rewarding, very differently.  Michael’s poems, full of love and sex and place but less birdlife than one might expect, are pungent, gamey, hung for a long time.  Do read the one on the HappenStance page, ‘Pax’.  This is from ‘Inishturk’:

Where else would a tall man down from the hill
bid everyone good morning, so safely
at four in the afternoon?
Such a place has frame and courtesy.
We who are not islanders, well –
we are lapped by unreasonable tears
in this outside: washing out from our hair
the sand of that clear shore.

***Michael Laskey, founder of the original Aldeburgh festival, reading with Kate Miller and John Clegg.  None of them had met but it worked – Clegg riffing on ideas to make us laugh, Miller’s painterly poems filled with light, sea etc and Laskey’s wisdom, vegetable and otherwise.  There’s a Smith Doorstop Selected Selected (not a typo) of his just out, and one of Mimi Khalvati too.  Nice idea, nice way to sell books.  Michael read ‘The Last Swim’, twelve beautiful lines ending:

And that’s best, to have gone on swimming
easily to the end: your crawl
full of itself, and the future
no further than your folded towel. 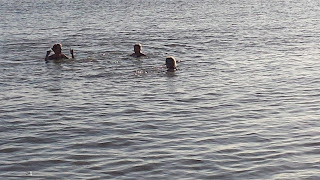 Swimming!!  Eight of us went in on Sunday morning, the water cold but clear and beautiful.  There was no poetry, we just swam, watching the pattern the sun made on the waves, turning to admire the shoreline disappearing both ways.  It was calm enough to talk and laugh without choking on seawater.

We had a house with windows full of sea and some of us stayed on afterwards.  Swimming score: 6/7 days – I had to miss a day when the waves were too big.  That day was hard.  Swimming becomes an obsession after a while, not-swimming feels like a failure to make the day complete.  There were lots of geese and waders in the lakes and marshes north and south of Aldeburgh; this year’s highlight was several godwits towards Orford Ness. I loved their long black legs.  I wasn’t sure, at a distance, if they were bar-tailed or black-tailed until I listened to the audio on my bird app – its black-tailed voice/call clashed with the marsh-sounds but bar-tailed blended in perfectly. 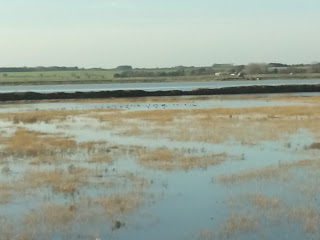 The brilliant Aldeburgh volunteers worked extreme overtime again, led by Daphne Astor and Robin Boyd (Daphman and Robin to their colleagues).  The rest of us turned up and enjoyed, in large enough numbers to keep the festival afloat.  It’s not subsidised by the Arts Council, the organisers having decided they’d prefer independence and minimal admin. 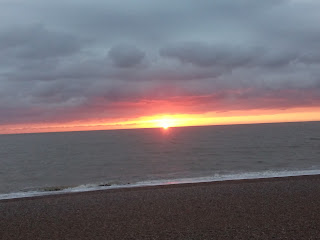 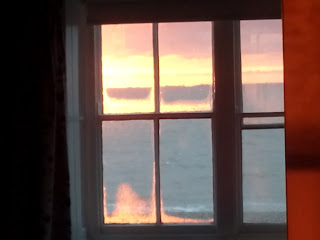