How many poets get a review/interview in the News Shopper, the long-standing free newspaper known and read from Greenwich to Gravesend?  "I studied some of Chaucer at school and it blew me on to another planet”, says Patience Agbabi.  (Declaration: I know her a little.)

Telling Tales, an act of homage, celebration and reinvention, contains a version of every Canterbury Tale –

says landlord Harry Bailey in the Prologue (see here).  April, month of the pilgrims’ setting-out and so beautifully described in the opening lines of the Canterbury Tales, here becomes his muse, with a hint of “cruellest month”:

how she pierces my heart to the fond root
till I bleed sweet cherry blossoms en route
to our bliss trip; there’s days she goes off me,
April loves me not, April loves me 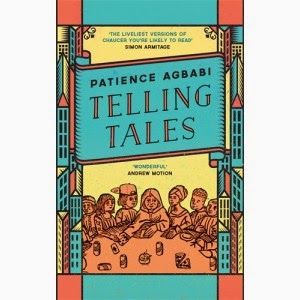 The linking device for the tales is still a pilgrimage from Southwark to Canterbury Cathedral, but it’s by Routemaster bus down the Old Kent Road and out via Dartford, Gravesend etc, and all the passengers are poet-performers.  There are local references in the text, for example in the Parson’s Tale, Chaucer’s extended sermon on penance and the seven deadly sins, here compressed into a rollicking story – ‘The Gospel Truth’ told by Rap, The Son aka ‘The Parson’.  The speaker tells us:

So it flows – Seven Sins was my crew, you can ask them,
use to be ‘The Pimp’ but now I’m ‘The Parson’.
Parental advisory, listen to the lesson,
this be no sermon, this be my confession …

Two roads diverged from the A2 –
one went to Heaven, the other Hey, you!
Fancy some fun, brotha, won’t you park n ride?
I paid a heavy price an I puckered up to PRIDE.
Her lips were wide, painted to a botox smile
and her scent more expensive than the square mile,

We learn about each of the performers not in the Prologue but in their send-up poetry-magazine style biographies, at the back of the book – from ex-bouncer to Oxbridge graduate, from dark cabaret performer to personal trainer (who “resides in Kent and writes a poem a day”) and Nigerian child bride (who tells the Wife of Bafa’s tale).

It’s not just the poets who are on show.  This book’s a display of the diversity of English poetry in forms both old and modern.  There are plenty of iambic rhyming couplets and some rime royal, both appropriate for Chaucer, but also a sestina, syllabics, a specular poem, those anapaests, a poem made up of 100-character texts, and various permutations of rhythm and rhyme.  As Harry Bailey puts it in what could be an Agbabi manifesto:

I got ink in my veins more than Caxton
and it flows hand to mouth, here’s a mouthfeast,
verbal feats from the streets of the South-East
but my April, she blooms every shire’s end,
fit or vint, rich or skint, she inspires them
from the grime to the clean-cut iambic,
rime royale, rant or rap, get your slam kick.

The forms aren’t just for their own sake but work with the content.  The Man of Law’s Tale is told in a sonnet crown, in the voice of the possessive mother.  She’s lonely in old age, “There’s dust on the computer screen. God knows, / I’m fast forgetting how to switch it on”, meditating aloud to a home help, telling the story of how her deceit and jealousy of her daughter-in-law drove her son far away.

She wasn’t bonny, always overdressed,
I’d never understand her when she spoke.
Not that I’m prejudiced, some of my best
friends are foreign.

Here’s what I’m spitting
out of my kitchen
hot and hard-hitting
none of it written.
Rhymes rough and raw
weeping like a sore
bruised and ruptured
rude, interrupted,

The long debate and doubts of the Tale of Melibee (here stemming from a Gravesend shooting) are reflected in a specular poem… having tried and so far failed to write one of these I know how hard it is, and this one is in rhyming couplets.  How did Agbabi do it?

Chaucer’s Monk’s Tale retells many tales in one, all about the mighty who are fallen (until the other pilgrims get fed up) and Agbabi reproduces its flattening effect in 100-character texts:

The Franklin’s Tale is in rime royal, which suits its intensity and seriousness.  It’s relocated to Edinburgh – read it for the lovely lyrical passages and to find out what impossible vanishing trick Dorigen/Deirdre asks Aurelius/Arild to perform.  In the last verse, broken-hearted Arild decides

to reinvent himself again, a makar:
to make a poem; hone it, room by room,
stanza by stanza; form, on one blank acre
from bricks and mortar, breath and metre, home;
to mount the spiral staircase of his poem,
take a battered volume off the shelf,
open a random page, and read himself…

The most enjoyable thing of all for me about Telling Tales is its relationship with Chaucer’s work.  I read and enjoyed the book very much on its own, then some months later went back to read (or skim, I admit, in a few cases) the Canterbury Tales, re-reading each Telling Tales version afterwards.  Seeing how Agbabi had decided to treat each one and what essence she’d extracted from each story enhanced the experience (and, dare I say it, the Chaucer tales too).

This also gave me the key to some tales whose retelling had puzzled me: several are compressed and/or somewhat cryptic.  I’d forgotten the Reeve’s Tale, a riotous mixture of theft and sexual shenanigans.  The two Cambridge students (male, of course) and their horse are replaced by two lesbians with a drug-sniffing dog.  The nasty miller is a dealer called Psycho, who lets the dog off its chain so he can substitute meadow grass for the dog-rated “top notch” grass.  The dog’s the speaker:

I’m off, Bad Dog
seeks Dirty Bitch for fun blind date
but don’t let cat out of the bag
to dykes. I’ve not come out as straight…

I was baffled by the Squire’s Tale, ‘Fine Lines’, until I went back to Chaucer for the weird brass horse with the pin in its ear, “so horsly, and so quyk of ye”.

All Agbabi’s poems work in their own right, but knowledge of the original adds more to some.  That doesn’t apply to ‘I Go Back to May 1967’, the painful Clerk’s Tale about Griselda’s trials – set in Lagos, an effortless, uncannily accurate echo of Sharon Olds’ famous poem about her parents and the harm they will do.  It starts, heart-sinkingly for anyone who knows the Olds poem, “I see them standing outside their family compounds”.

Chaucer took his stories from Boccaccio’s Decameron and many other sources.  The Riverside Chaucer comments tale by tale on origins.  Agbabi is retelling both Chaucer and today’s tales.  On the day I read her interview on the News Shopper’s website, the headlines in the links could have been straight out of Telling Tales, or inspired a parallel version:

Sheer enjoyability in poetry has been rewarded this year, with Kei Miller’s and Liz Berry’s wins at the Forward Prizes – both so well deserved, but why hasn’t Agbabi’s inventive, delightful, highly accomplished and also deeply literary book received as much attention?

Telling Tales would be such fun to read and laugh over, with reference to Chaucer, plenty of wine and ideally round a fire, over the holiday.  I hope it gets read in schools with the Canterbury Tales – a perfect way to get teenagers interested in late medieval life, high and (mostly) low… and in contemporary poetry.

Telling Tales is published by Canongate.  (Is that one reason the book’s had less attention in the poetry world? Because it’s come out from a mainstream publisher that doesn’t have a poetry list?)
Posted by Fiona Moore at 20:20