That’s not Poetry Rules OK, though it does on this blog, but Rules for Poetry. These get tossed to and fro in workshops like paper aeroplanes, or lurk like U-boats below the surface of reviews.  One day, if the world continues as we have known it, someone will write a PhD on what effect poetry workshop culture had on poetry in the early 21st century.

The only good poetry rule is this one: THERE ARE NO POETRY RULES.  It’s tempting to call for a ban on all the others, but that would be accepting the terms of the rule-makers.  Here are the ones I find most irritating:

DON’T CLOSE OFF POEMS AT THE END

Telling, abstractions and closing-off are difficult to do well, today – for example, it’s easier to end a poem by stepping off lightly or at an angle.  These three do cause problems in draft poems.  But advising people not to try them at all is like saying, don’t try anything difficult.  Or, don’t take risks… though ‘risk-taking’ is one of the most annoying adjectives used in reviews.

Better to make apprentice writers aware of the pitfalls, not warn them off altogether.  Ezra Pound:
“A man of genius has a right to any mode of expression.”

And yes, that’s the Pound of the Don’ts.  He does say that his list is “for those beginning to write verses” (at the beginning of ‘A Few Don'ts by an Imagiste’, first published in Poetry in 1913, though not necessarily in the issue pictured here).  Geniuses were presumably exempt.

Interesting that the Don’ts have lasted for 100 years.  What does this tell us about poetry now?  That a set of precepts formulated at the dawn of free verse still applies in its maturity, or that we’ve got stuck, or a bit of both?  Maybe we’ve just got stuck on the idea of Rules.

One of the most quoted items from Pound is, of course, “Go in fear of abstractions”.  (“Fear” is an interesting word choice.)  I wonder if that’s an example of having got stuck.  But it’s immediately followed by this less quoted passage:

That remains excellent advice (and it is advice, rather than a Rule).  Pound could open many poetry magazines today and find a poem that has deceived.

Les Murray has the right idea.

I'm a dissident author; the deadliest inertia is to conform to your times. 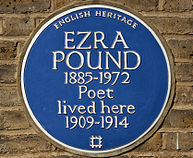 Editors who have to read hundreds or thousands of poems may disagree about avoiding rules. They are well placed to identify today’s poetry trends and mannerisms.  Helena Nelson of HappenStance sometimes writes about these on her blog.  She reads like crazy for two months a year and must be the UK poetry publisher with the clearest, most transparent guidelines.  (She’s my publisher so I’m biased, but find me another like that.)

I’m revising drafts at the moment, and have gone back to a piece Nell wrote last year.  Near the end is a list of around 20 features of what she calls “Contemp Po”.  A list that I read both as writer and reader, checking off which habits I’ve got, and which I recognise around me.  None of the three Poetry Rules listed above is there – I wonder if that’s because everyone is either following them, or taking the risks successfully.  Here are four of (to me) her most interesting items:

– the word ‘yet’ flagging an epiphany;

– cross-stanza enjambment with no particular logic to it, except to fulfil the poet’s desire to divide stanzas into neat chunks of two, three, or four lines;

– …sections relying heavily on two or more verb clauses, each appended to the same subject. Often this increases towards the end or high point of a poem… I walk into the room, pick up my gun, shoot the publisher.

This stuff – not rules, but advice to help us poets see ourselves as we are, subconscious absorbers of trends, of micro-memes – is gold dust for any emerging writer.  Nell’s also been blogging this month on the same theme, and giving (as usual) syntax the place in criticism that it deserves but rarely gets.  Here she is on engaging the jaded reader’s interest in the first few lines of a poem:

The syntax (by which I mean the grammatical structure of the opening statement or sentence) is usually crucial.

To end, here's a classic piece of poetry advice, my favourite ever, from Philip Sidney's muse.  And oh, what he does with syntax!

Loving in truth, and fain in verse my love to show,
That she, dear she, might take some pleasure of my pain,—
Pleasure might cause her read, reading might make her know,
Knowledge might pity win, and pity grace obtain,—
I sought fit words to paint the blackest face of woe;
Studying inventions fine her wits to entertain,
Oft turning others' leaves, to see if thence would flow
Some fresh and fruitful showers upon my sunburn'd brain.
But words came halting forth, wanting invention's stay;
Invention, Nature's child, fled step-dame Study's blows;
And others' feet still seem'd but strangers in my way.
Thus great with child to speak and helpless in my throes,
Biting my truant pen, beating myself for spite,
"Fool," said my Muse to me, "look in thy heart, and write."
Posted by Fiona Moore at 19:04