The square room at Poetry East with the golden encircled Buddha was full up last weekend for Alice Oswald.  She was there to be interviewed by Maitreyabandhu, and then to read.  Though ‘read’ isn’t the right word, for someone whose only act of reading was to glance at a piece of paper, in between speaking her poems by heart.  Her ability to do this has become legendary after her reciting of the whole of Memorial in London last year – I wish I’d gone.  This time she recited [I keep typing ‘read’, in my page-bound mode] the beginning and the end.  Most interesting was how she said the repeated similes.  The first time was livelier, the second like an echo.

A couple of people thought she didn’t repeat any of the similes.  (Those at the end don’t get repeated anyway, but the rest do.)  Maybe they were listening primarily to her tone of voice, and heard difference rather than similarity, which is what Oswald said she intended. Someone else noticed that each time Oswald repeated a simile, her change of tone was the same.  I think this was deliberate.  Not to everyone’s taste.  The way she did it, the beauty of the words was what came out. Memorial is an elegy, and was spoken like one. 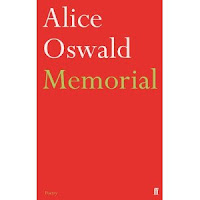 In the interview, Oswald said that she loved Homer at school, the actuality of it, the pluralism (gods etc), the stillness that ancient Greek can have and the fact that Homeric works date from archaic times – later in classical antiquity, rules got developed for literature.  She wanted to liberate the Iliad from a rigid approach, the male tone of nobility.  Originally she intended to centre her version on Helen, but got taken by the oppositions inherent in the text: the battle scenes, the similes from the rest of life. She used repetition to create a counterflow, and as a gesture to the repetition in Homer, the stock phrases.

She pointed out that Memorial and Dart have things in common.  They both contain a plurality of voices, Homer emerging from oral tradition, and Dart with material from many interviews Oswald did with people around the river.  She thinks long poems are easier to write (well).  The infinite choice in contemporary poetry makes it hard to generate the necessity for a short poem, whereas a long poem generates its own.  (That may be true for her, but I’m doubtful about it as a generalisation.)  Her own liking for fragments makes it easy to break off a long poem.

Once, aged eight, she was awake all night – night becomes different when that happens – and realised that poetry could describe something a daylight language could not.  That was her starting point.  She quoted Samuel Beckett telling an actor, Speak as though you have moonlight in your voice.

She described language as the pinhole through which light comes.  The pinhole should let something in more than the writer, should admit the energy of things.  The poem should have something in it more than itself.  Talking about this afterwards, someone directed me to a ‘Sea Sonnet’ from her first collection, The Thing in the Gap-Stone Stile. This poem, like her statement, feels manifesto-like.  Here are the first four lines of the sestet:

So I have made a little moon-like hole
with a thumbnail and through a blade of grass
I watch the weather make the sea my soul,
which is a space performed on by a space..

And this is the beginning of her sonnet ‘Prayer’, from the same book.  You can read the whole of ‘Prayer’ here.

Here I work in the hollow of God’s hand
with Time bent round into my reach. I touch
the circle of the earth, I throw and catch
the sun and moon by turns into my mind.

And here is an extract from that book’s title poem, whose speaker is “peak-striding”:

I dropped hankies, cut from a cloth of hills,
and beat gold under fields
for the sun to pick out a patch.

The evening started with readings of two poems important to Oswald.  One was a one-liner by Ian Hamilton Finlay.  Alice Oswald, a gardener by profession, knew him and his garden: while writing, she said (or had he said it?) one should test each phrase to see if it would withstand inscription on a stone.

The other was Gerard Manley Hopkins’ sonnet ‘Patience, Hard Thing!’  Reading it now, after leafing through Memorial to copy out a simile, it sounds quite Oswald-Homeric, despite the very different focus.  I couldn’t possibly justify that comment; it may only be the juxtaposition.  Is the imagery perhaps rather archetypal, while also being very original? And then there’s war and wounds and tosses, however metaphorical.  I don’t know the Hopkins poem well; I’m going to write it out, for the pleasure of it.  From a book, not copied-and-pasted off the internet. Oswald said she loves Hopkins’ rhythm, the syncopation he creates.

Patience, hard thing! the hard thing but to pray,
But bid for, Patience is! Patience who asks
Wants war, wants wounds; weary his times, his tasks;
To do without, take tosses, and obey.
Rare patience roots in these, and, these away,
Nowhere. Natural heart’s ivy, Patience masks
Our ruins of wrecked past purpose. There she basks
Purple eyes and seas of liquid leaves all day.

We hear our hearts grate on themselves: it kills
To bruise them dearer. Yet the rebellious wills
Of us we do bid God bend to him even so.
And where is he who more and more distils
Delicious kindness? – He is patient. Patience fills
His crisp combs, and that comes those ways we know.

That’s one of the good things about writing a blog.  When I started this piece, I didn’t expect to be thinking about GMH.  His influence on AO can be seen in ‘Prayer’ above, for example, or the rich language in Dart.

You can listen to her interview here.
Posted by Fiona Moore at 18:03