Durs Grünbein and The Vocation of Poetry – Part I 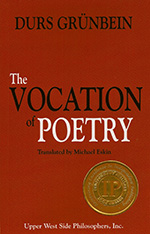 The Vocation of Poetry (no italics available for blog headings) is pocket-sized, a book of essays, the whole thing under 60 pages.  Ideal for journeys across London, or any city where the ritual of public transport is observed.  A few stops on the train, transfer to the tube, change tube line, maybe finish the journey by bus… and with the walking either end that’s conducive to thought.

This small book contains the most illuminating reflections on a life of writing poetry.  It is exotic, if one is unused to this subject being addressed from a tradition that’s not English-speaking; the turns of thought and points of reference are different.  The translation plays a part too – it has retained a foreignness.  Another factor is that almost the first three decades of Grünbein’s life were spent in East Germany, a country that no longer exists.

This we recognise straight away; in the second sentence of the book, we are already in Thuringia.  The title of the first essay, ‘The Puzzle Master’, refers to Grünbein’s grandfather, who was a crossword-setter for East German newspapers.  We get a page on his background (prisoner of war in the Soviet Union) and the politics of crosswords. “His words, too, were put behind bars; but at least you could watch them in isolation, like rare animals in a zoo.”  He involved his grandson in the work.

Before I even knew it, my grandfather had ensnared me in a universal game of memory… one where you had to bring your own images and symbols to the game.  And there it was – that electrifying prickle, that appetite for words.  Whenever I experience it even today I feel like Adam about to name every living creature…   The individual ‘word-as-nerve-center’ in the great crossword of the unconscious – that’s what woke me up at a single stroke, making me receptive anew to the world and its myriad manifestations insofar as they were accessible through language.  It was the beginning of an unconscious excitation which, I believe, led me directly to poetry.
…
He had infected me with his passion for collecting something that lay on the streets, so to speak, and belonged to everyone and no one.

In the second essay, ‘Beyond the Avant-Gardes’, Grünbein discusses the state of poetry in the second half of the 20th century, after modernism.  He summarises a particular perspective in a couple of pages. The whole of this passage is in the past, and Grünbein does not answer the question, What now?  Whatever one’s opinion of the perspective, it’s worth hearing him in full flow.

Who would have now dared, in good conscience, to echo Baudelaire in calling poetry the antidote to the sin of banality?  In hindsight, one could speak of an impoverishment of expression.  At the time, however, this impoverishment was hailed as a democratic achievement… Poetry had broken into the world of current affairs and was suddenly open to any subject, a repository for all social ills.  It had become a daily fast-food item that helped to digest and metabolise banality into permanence…   The sway of poetry as ‘supreme fiction’ (in Wallace Stevens’ and Stefan George’s senses) was forever broken.

In the third essay, ‘Outline of a Personal Psycho-Poetics’, he talks about influences. It’s common enough to find poets writing in English, especially Americans, citing Baudelaire, Rimbaud etc as influences (on themselves or others), but how many go beyond the French symbolists, and maybe the occasional mention of Rilke or Hölderlin?  I was delighted to find that the young Grünbein tried to write like Hölderlin for a while.  (He then tried to write like Rilke.)  But I’d only heard of Johannes Bobrowski, described here as a 20th-century Hölderlin, from reading Michael Hamburger’s The Truth of Poetry.  Then there’s Novalis, Georg Trakl, Georg Heym, Annette Droste-Hülshoff, Jakob von Hoddis, Gottfried Benn, Rudolf Borchardt… etc…  Names (shamefully) only half-known, a few never heard before, a whole parallel world to be discovered.  Oh, and the French symbolists.  Paul Celan is named not as an influence, though surely he must have been, but as an outstanding 20th century figure.  He should be so named in every survey in English.

‘Influence’ is too definitive a word, though:

Among artists who keep their eyes peeled influences play out mostly on the subconscious level… You take nothing directly from others.  The poetic trade is not an import-export business, you only take along what you consider valuable on your own journey.

Grünbein writes about his development against the background of living in the GDR, stuck there, not knowing the world outside.  His teenage hinterland was an area of messy countryside near Dresden (of all places), used for military exercises.  One day a pigeon flew out right by him, so he could feel the wind of its wings on his face – this “set something in motion that hasn’t stopped working to this day and became a template for many a future (and much more consequential) moment of epiphany”.  Interesting that it was a flight – an escape – which “illuminated my entire being in a flash”.

He says this, about that experience: “I suddenly felt the uncanny at the heart of my surroundings”. He quotes from a much later poem, ‘Trigeminal’:

Unthinkable for a child riding his new bike
Not to wave at the distant Kyrgyz in the watchtower,
The Siberian guard behind the wire fence, so close.
Everywhere, there were crime scenes, gray regions. A cold atlas
Grew along your scalp, across your neck and forehead,
Following every facial nerve stimulated by the rain,
Until you recognised the roaring from within: the East,
The leaden rivers, the flats, the permafrost,
All that was big and lost, sprawling to Vladivostok.
Every shot drew a line through the open space…

Of the pigeon, he says:
The pigeon embodied a yearning that would soon turn into an obsessive dream of flight and, subsequently, into the fixed idea of being capable of overcoming not only national borders and concrete walls but even the constraints of space-time itself – an idea that poetry alone was powerful enough to make real.

This is a poet who will not stay hiding in the cornfield, but will break out and soar.  His ambition for poetry marks this book.  Which, although small on the outside, is so big inside that I can’t say, or (especially) quote, everything I want in one blog post.  I’ll write about it again.  See here for part II.

It’s also not very accessible, unless you want to read it as an ebook – see the price online.  It’s not in the London Poetry Library, at least not yet...  Why has no-one published it in the UK?  Are we still so insular?  Does the current interest in poetry in translation (Poetry Parnassus, MPT, Bloodaxe etc) not extend to poetics?

There’s far more of Grünbein’s prose in English online than his poetry.  There’s one poem here.  Ashes for Breakfast, his selected poems in English, translated by Michael Hofmann, published by Faber, seems to be out of print though is variously available online, not only from tax-avoider Amazon.  My copy has disappeared – has anyone out there borrowed it, by any chance?


The Vocation of Poetry is published by Upper West Side Philosophers, in a translation by Michael Eskin.