Today Displacement is delighted to welcome a guest, who’s made it through storm and floods: Manhattan based poet Helen Klein Ross.  Despite having to batten down all hatches, she’s found the time and mental space to write about what it was like to be commended in the National Poetry Competition last year. 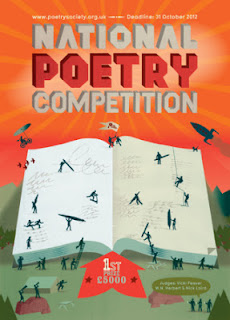 Her piece is part of the blog tour that the Poetry Society have organised to celebrate the deadline for entering this year’s competition… Wednesday 31 October: that’s tomorrow (or today, or last week, depending on when you read this).  And to encourage everyone to enter.  Which you can do here, online.

You can find her lovely, atmospheric poem, ‘How to Furnish an American House’, here (scroll down the page).  I’ve just re-read it; in the aftermath of Superstorm Sandy, its beginning and end acquire new meanings.

I loved being able to say that I was going over to London because The National Poetry Society was commending one of my poems. This made it sound as if the judges, while sorting through all the poetry in their own country, were helplessly distracted by the luminousness of a poem (my poem!) blinking at them from across the pond.

I’d entered the contest after seeing it listed in Poets and Writers magazine. At first I thought the prize money was a typo, that they’d added a zero or two by mistake. I entered three poems—one surrealistic narrative poem, one sonnet (to technology) and a found poem sourced from language in a 1949 home decorating manual.

When I received the email telling me that the found poem had made the shortlist, I couldn’t believe it, as I thought it was the humblest of the lot. I suddenly saw it in a different, brighter light and this was a lesson in how public acknowledgement shifts the look of things in one’s mind.

Before the ceremony at the swank Saville Club in London, we honorees sat in a circle of folding chairs in the Grand Hall sharing stories of how we had come to be there. We all mentioned with whom we had studied, of course, and I was stunned that there wasn’t more of an overlap, that no one had heard of Frank Bidart or Lucie Brock-Broido who are poets held in high regard in the US not only for their own work, but for their generous mentorship. My fellow honorees were equally surprised that I’d not heard of the poets they’d worked with, and this made for a lovely animated exchange, as if we’d gathered from countries on opposite sides of the world, not two nations with the same cultural heritage and language.

A word of advice: remember that the judges aren’t evaluating a body of work, they’re looking out for a single poem. And that poem must read well. Read it out loud. To my surprise (and dismay) before the ceremony, each of us was videotaped reading our poems to a camera and the footage was posted on the Poetry Society’s website where it will preside presumably as long as the internet does. So a final piece of advice: if you happen to make the NPC shortlist, be sure to get a nice hair cut. 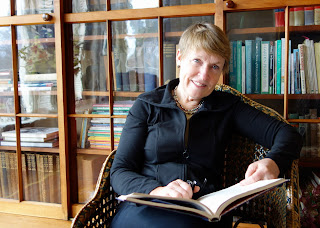 Helen Klein Ross is a former advertising copywriter whose fiction, essays and poetry have appeared in literary journals and The New York Times. Her work has been nominated for a Pushcart Prize and commended by The Poetry Society in London. Her first novel is forthcoming from Simon & Schuster. Helen lives in Manhattan and on twitter as @AdBroad.

The whole blog tour linked on the Poetry society website

And another post in the blog tour, by Ian Duhig, has just gone up at George Szirtes' blog.
Posted by Fiona Moore at 21:16