Instead of poetry; and briefly, Peter Reading, Miroslav Holub

Should this wonderful weather cheer us up in hard times, or make us worry about climate change?  Or both.  I hope it’s cheering those who’ve gone on marches today.  To avoid being made despondent again, don’t read Polly Toynbee in the Guardian on the Chancellor’s Autumn statement… or Martin Wolf in the FT.  Or this, again in the Guardian, by Naomi Wolf about why the US response to Occupy protests has been so vicious.  You may have read them already, in which case this warning is too late.  (I wonder how many readers of this blog read the FT?  I used to read it daily, the European edition, for work - its foreign reporting was really good.)
Not that the weather’s wonderful everywhere, of course - dire warnings of Scottish west coast gales, though that just makes me want to be there, except not on a fishing boat.  Someone has been reading this blog from Ethiopia in the last couple of days - I’d love to know who.  In the capital, it’s 21 degrees or so, and sunny.  But Ethiopia has mountains and deserts too, so Addis Ababa's probably even more unrepresentative than London is of the UK.
This BBC graphic is good for trying to disentangle the web of world debt - includes fundamental stuff such as debt ratios, and who owes how much to whom.  And here’s a Guardian piece questioning the assumption that continuous economic growth is indispensable.  I still remember the moment I first thought of asking Why Growth: nearly 20 years ago.  Why did it take me so long?  I tried it out on the nearest friend, who happened to be an FT correspondent…
And here’s a great quote on the Euro crisis, from a speech by Radek Sikorski, the Polish foreign minister.  "I will probably be first Polish foreign minister in history to say so, but here it is: I fear German power less than I am beginning to fear German inactivity."  (I think it would have been quite safe to leave out the ‘probably’.)
All this is by way of saying, today doesn’t feel like a day for poetry: the discourse of other things has taken over.  Not that it should be a zero sum game, but today it feels like that.  I’ve already blogged about the difficulty of writing political poetry in these times.
***   ***   ***   ***   ***   ***   ***
I feel I should be writing something about Peter Reading, as he’s just died - and in such times.  I can’t because I hardly know his work - have only read a few poems, which have left the impression of knotty contrariness, bitter satire, a vast language range and great skill with form.  The best thing I’ve read about him in the last week or so is the Bloodaxe blog - includes a brief biog, a great para describing the essence of his work, links to obits, some critics’ quotes, and recordings of him reading.  So I’m going to start from there, having left it too late…  I don’t even know if I’ll like all his poems.  There are a few online at the TLS, including a lovely Ovidian one.
***   ***   ***   ***   ***   ***   ***
Back to instead-of-poetry, sort of.  Miroslav Holub, Czechoslovak poet-scientist, can have the last word:
There is poetry in everything.  That
is the biggest argument
against poetry. 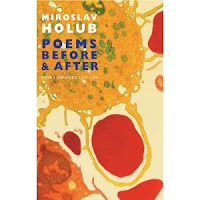