Oona and I go to a poetry workshop in Greenwich.  Most weeks, the first hour is spent discussing a poem or poet - could be anyone from the dawn of poetry until now, though it’s usually 20th or 21st century.  The sheer unpredictability of people’s choices makes this fun.  One of the most enjoyable sessions was led by Oona.  She has very kindly recreated it for this blog.  Here it is.

“The most difficult task in the world is the translation of verses.  Mr Robert Lowell’s translations (of Osip Mandelshtam) are very free.....a far cry from the original.”   Nadezhda Mandelshtam, 1976.

What does the translator of a poem want: to render an original faithfully or to raise his or her own monument on the foundations of what went before?  When we think of the Rubaiyat, do we think Khayyam or Fitzgerald?

What does the reader of the poem want?  Not, we are advised, a wooden, word-for-word rendering.  To keep the ‘spirit’ of the poem we must make sacrifices.  Any translation seeking to be the original will certainly fail. 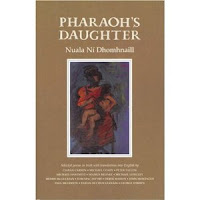 And yet, when faced with an English translation of a famous poem from the Irish (my native tongue, which for reasons of history and politics I never learned as a child) I found myself critically raking the lines of Muldoon`s version of ‘The Language Issue’, ‘Ceist na Teangan’ by Nuala Ní Dhomhnaill, wondering: where is the truth; how much is this a good poetic creation and how much a faithful thread back to the original.

The poem, as rendered by Muldoon, is beautiful.  But his translation is into English.  With the centuries-long suppression of the one language by the other, how could the truth of an Irish poem, on the very subject of language, be assured in English.  Both texts are in full at irishpage.  The poem starts:

I hovered over the pages comparing the two versions, seeking clues in the very shape of words, of verses, of line breaks.  Only in my fancy did the Irish original text seem to breathe authenticity as if its roots stretched back to the ancient Celts.  But though I spoke not a word of it, a surface examination suggested discrepancies between it and the English version.   I lingered over the arcane-looking word ‘feileastraim’ in Ní Dhomhnaill`s fifth line, searching for what might be its equivalent in Muldoon’s.  The word ‘féachaint’ (‘looking’) is echoed in Ní Dhomhnaill’s second verse but with no equivalent repetition in the translation.  And why was the capitalised name ‘Mhaoise’ (Moses?) missing in the English?

Quickly, it became clear that although Muldoon’s text appeared to mirror the form of the original, he had taken some liberties with words, with phrases.  What was changed? Or omitted?  I felt a need for something we are rarely given: a literal job.

Writing to my Aunt, an elderly, well-read nun in a Dublin convent and a fluent speaker of Irish, I begged her to make me an honest, literal translation of the poem   -   and let the sentiments speak for themselves.  Her version came back soon.  She apologised that it wasn’t as poetic as Muldoon’s but, for me, her promised fidelity to the original satisfied a craving.  Here it is.

I put my hope in swimming
in a little boat of the language
just as you would lay an infant
in a cradle
that would be made of
intertwined leaves of the wild iris,
a mixture of bitumen and pitch
rubbed into its underside.

Then to let it down
amid the sedge
and wailing of the fairy women
by the edge of the river,
looking and wondering
would the flow take it
looking to see, as happened to Moses,
would Pharaoh’s daughter come to save it?

Contrasts jumped out, some minor: but relevant if you suppose that words are the units of meaning in a poem.  The intriguing word ‘feileastraim’ that had caught my eye, she rendered as ‘wild iris’.  In Muldoon’s version the ‘wild’ is dropped.  As an aside, my aunt noted that this Irish word “has come into English” in some parts of the country, especially in Kerry and parts of the West,  “although they omit the ‘f’ in Kerry”.

Nuala Ní Dhomhnaill’s original poem embodies the belief that the Irish tongue may survive, travelling on the flow of the more far-reaching English.  Others have questioned Ní Dhomnaill for publishing in this little-spoken language rather than in English, but she has chosen to hope that her poems will somehow ‘find a way’.  With new generations of Irish people now speaking both languages, my aunt’s comment about the ‘feileastraim’ seems to bear out that hope: the one tongue infiltrating the other, or ‘intertwining’ with it as the poem suggests.
﻿
Most puzzling in the second verse of Aunt Mona’s translation, is a reference to the ‘wailing of the fairy women / by the edge of the river.’   This can’t be found in Muldoon’s.  Instead of fairy women he has ‘bulrushes’ which set me wondering about localised folk names for plants that perhaps my aunt may not have known.

It was in one of her final letters to me that Mona enclosed the translation.  In that letter she also touched on Irish political history, commenting that she had been too young to remember the Civil War of the 1920’s between the Irish Republican Brotherhood and the Free Staters.  She did, however, recall the story of her mother, whilst pregnant with her, being shocked by a bullet coming through the window and hitting the wall above her head.

Heeding this early steer away from the armed struggle, my Aunt was nevertheless a nationalist, believing in the essential need for the Irish to know their own history and culture.  This embraced not only her long study of Celtic myths and early Irish writings but also expressed itself in the interest she took in everyday usage of the language.

When based in the order’s convent in Galway and the West of Ireland for a number of years before she retired, she took particular delight in conversing with Irish speakers.  Local names for places, for animals and plants always intrigued her and formed part of her conversation with me.

With this in mind, I’m biased in favour of her translation, accepting that Muldoon had his own reasons for dispensing with the striking image of wailing women in the original poem.  My aunt stresses in her accompanying note that she is trying to make an accurate, ‘not a poetic’ translation: she takes no poetic license.  At times, this is exactly what a reader wants.

***
Many thanks to Oona for this.  We’ve since discovered that the Irish for bulrush, ‘coigeal na mban sí’, means ‘spindle of the banshee’.  Mban sí = banshee.  SOED: “a female spirit whose wail portends death in a house”.  I wonder how Aunt Mona made her choice for this bit of her translation; whether she thought, as Ní Dhomhnaill must have, how fitting for this Irish poem that Moses was hidden in bulrushes.  Reading more of Ní Dhomhnaill’s poetry, which moves in and out of the fairy world - mermaids, a phantom boat, a fairy with a Black & Decker - and reclaims it for modern times, I think a fairy reference here is appropriate.  I love both English versions. 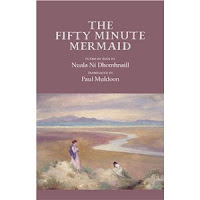 The poem ends with a question, using the conditional; Muldoon’s translation ends in a statement. I wonder if the former is a characteristic of Irish, also maybe apparent in Irish  English.   I thought about this when  walking in Ireland recently.  I was heading uphill and got asked: “Would you be thinking of going the wrong way up the mountain?”

‘Ceist na Teangan’ appears along with Paul Muldoon’s translation in Pharaoh’s Daughter, published by the Gallery Press.  There is a recording of Ní Dhomhnaill reading it here.  There is a good commentary on Nuala Ní Dhomhnaill’s work at the Poetry Foundation.
Posted by Fiona Moore at 16:19