This was Saturday, day of the Poetry Book Fair in Exmouth Market.  Why hasn’t something like that happened before?  Never mind, it’s happened now thanks to CB Editions and it was wonderful.  Imagine a church hall, complete with red velvet stage-curtains and metal icicles hanging from the ceiling.  There are trestle tables all round the edge, covered with poetry books - 22 publishers from Anvil to zimZalla, from all points of the compass, co-existing amicably - and the hall is full of people talking about poetry.  Scraps of publisher-conversation emerge.  “Oh, I had such difficulty with [insert well-known name of modernist poet], he kept changing his mind about what to put in.”  “So-and-so’s doing a lot of stuff online, he films himself writing and reading out at the same time.” 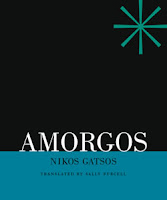 This was so, so much better than visiting 22 internet sites. It’s much easier to get an idea of who publishes what - to make connections - when the books are there like a jigsaw puzzle with extra colour and you can hold them, finger the pages, look at the typeface; and browse through them, taking in the shape of the poems, reading bits here and there, reading half a book...  I discovered that Arc publishes poetry in translation in parallel texts: I’d got one from some event long ago, had assumed it was a fluke, but no!  Anvil does a few too; I bought Nikos Gatsos’s Amorgos.   I nearly bought the Reality Street book of (modernist/innovative) sonnets edited by Jeff Hilson - but thought of its weight and the several miles I had to go.  Have just ordered it the usual, boring way, plus a book from their online September sale, Out of Everywhere edited by Maggie O’Sullivan.

It was also good to put names to faces.  Most interesting for me was meeting my publisher-to-be, Helena Nelson of HappenStance.  And several authors in the HappenStance stable, who were telling me how much they enjoyed being edited by her.  I bought pamphlets by Mike Loveday, Kirsten Irving and Jon Stone.  The latter two run Sidekick Books, so were manning both stalls at once.  Then there was Stephen Watts, whose book The Blue Bag I reviewed here; and Nii Parkes of flipped eye, who had a really great poem in the last South Bank Poetry.  flipped eye’s stall had some great pamphlets and I bought Malika Booker’s Breadfruit.  Not everyone was there: London-based Hearing Eye and tall-lighthouse weren’t. 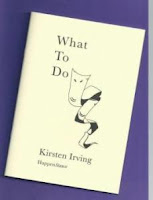 There were readings all day upstairs, via a staircase-with-lift-in-the-well straight out of Tinker Tailor Soldier Spy.  Helena Nelson had a neat way of fitting her six readers into less than half an hour: she lined them up along the front of the small room like one half of Strip the Willow and they each read a poem in turn, then another.  Listeners had to be sharp about making connections between rounds one and two - interesting.  It was great to hear DA Prince, whose poems I always like in magazines.  And I especially enjoyed ‘Ants’ by Kirsten Irving, which ends:
She chews these ants to dust
for you, who have become a spear for her,
a rocket launcher she will fire backwards.
She chews past nothing,
past ant-pockets of clarity,
past the ghost ants scaling her body,
and trains her throat to open.
There was too much to do and not enough time… between talking to the publishers (who are all heroes of course, to be publishing poetry), looking at books, meeting friends, going upstairs for readings or outside for a coffee in Exmouth Market.  I didn’t register all the publishers.  Where was superhero CB Editions who organised everything so well?  I couldn’t take it all in.  And I wish now that I’d bought more books; I only bought half a dozen while there.   CB Editions, I promise I will if you run it again next year.  Best of all, if this isn’t totally impractical, run it for several days so people can come back.

The fair filled a gap in the market (yes, there must be a poetry market because there is a gap).  As Chris Hamilton-Emery writes in an excellent crusading piece on the Salt blog, if only some of the funds given to and taken away from poetry could be devoted to subsidising real space for small publishers and their readers.   A shop.  Or pop-up events in empty shops, of which there are now plenty; and a blog directing one where to find the next one.  Or a back room in a bookshop somewhere.  Or in any shop.  Or the upstairs room in a pub that doesn’t use it and wants more custom.  Or a café.  Or a barge (OK, there’s a book barge already; and, according to the Salt blog, other cities have poetry fairs).  Or an HGV (Salt blog again), a yurt, a magic carpet, someone’s garden shed…  Or the Festival Hall, inside and outside the Poetry Library - there’s lots of space on Level 5.
After the fair I walked down through Clerkenwell to the river and Tate Modern, where a workshop run by Pascale Petit was holding a reading - on the 7th floor, in a glass-lined room with wonderful views.  People had used the paintings to write about their own stuff, and there was an impeccably designed Tate pamphlet.  The last reader was Karen McCarthy Woolf with an utterly compelling poem, online here, which starts:


The Wish
spreads its branches so twigs scratch
third floor windows, pushes through cracked
glass into front rooms cluttered with books.
Posted by Fiona Moore at 13:49