Poetry in the Sea


This post is for anyone anywhere who wonders if poetry in the sea is viable – as a reading, an event, performance art or just for fun.  The answer’s yes to most of those even in testing conditions, though as a reading you’d need sea calmer than we had. 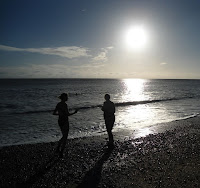 Our experiment took place early on a blue-and-gold November morning, the Sunday of Poetry in Aldeburgh.  The sea had that molten-metal look, very very bright in the low sun; wrinkled by the wind and running big breakers into shore.  Caroline Wiseman of the Lookout tower, who swims every day that it’s possible, led the way down the beach to find the best place to plunge in without being overturned.  Briony Bax, Joanna Clark, Lisa Kelly and I followed.  Caroline swam off southwards, looking as though she’d make it to Orford Ness and beyond, and the rest of us flipped around in the waves, trod water and spoke our poems in turn.  Each poem had something to do with the sea.  Yes, it was cold – but we all stayed in for all four poems.  And we had an audience, small but distinguished.  See Nell Nelson’s blog for their perspective.  She and Selina Rodrigues took the swimming photos. 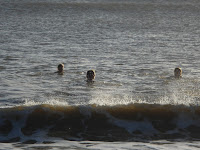 Spectators rather than audience.  The four of us in the water could all hear each other.  Those on land could snatches of words at first, and then...  I was prepared for the waves to drown our voices (each time I’d checked the weather forecast in the days before, the wind speed had strengthened; on the day it was probably around 15mph).  But I hadn’t reckoned with the longshore drift.  It was powerful and moved us southwards along the shore quite fast; by the time we noticed this the spectators had receded.  You can hear what they heard: Aldeburgh blogger Ben Rogers was there and recorded… well, mostly the sea but you can find voices among the roar. 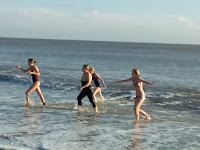 Anyway, we all loved doing it.  The event got a lot of attention and support.  Next year I want to do it again: ideally with more performers.  The snag with that is it’s best done early in the day, before programmed events start and so that people can go back home afterwards for a hot shower and breakfast.  And who wants to get up early on the Sunday morning of a festival? Though a cold swim is the best hangover cure I know.  Also the time couldn’t be confirmed until the weekend itself, given the changeable weather.  Though I’ve discovered a website that forecasts local wave height (plus wind strength etc), by the hour.  So: maybe more precise forecasting and lots of publicity in advance.  And consultation among potential swimmers to see what they think about timing.  Cold water swimmers who go to the festival, you’ll be hearing from me! 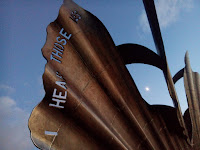 There will be a festival next year, or possibly two.  The volunteers of Poetry in Aldeburgh did a brilliant job.  They delivered a lot of events, from small to large and from interesting to very memorable. And they broke even, on a budget at the low end of five figures.  Strengthened by their success they have undertaken to do it again next year, the same weekend, 3-5 November.  And the Poetry Trust have got a transition grant from the Arts Council to plan for a 2017 festival too. Snape festival with Aldeburgh fringe?  Who knows; from the audience perspective what matters is that there will be poetry (this time last year there was the prospect of none).

The photo just above is of Maggi Hambling’s scallop on the beach, some way north of where we swam.  The late afternoon moon is in the gap.  The words are from Benjamin Britten’s opera Peter Grimes: "I hear those voices that will not be drowned".
Posted by Fiona Moore at 20:19