What is the language using us for?  What were we all doing at the book fair, selling and buying books, networking, reading, listening? 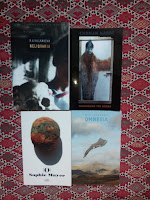 WS Graham’s question got quoted at the fair’s panel discussion on Poetry & Politics with Choman Hardi, WN Herbert, Sophie Mayer and RA Villanueva.  They talked passionately and collaboratively for almost an hour and the crowded room listened hard.  People kept coming up to me afterwards (I chaired the panel) to say they wished it had gone on for longer.  Or that they’d tried to get into the room but were turned away because it was full.  The discussion was filmed and it’s just gone up on the Book Fair’s website.  Bill Herbert has also put the link on New Boots & Pantisocracies and invited comments.

Before the panel I had fun collecting quotes, to have in my back pocket in case discussion needed stimulating (it didn’t).  Here is a mixed bag, a lucky dip starting with one that, as Book Fair director Chrissy Williams reminded me, is usually quoted misleadingly, first five word only.

For poetry makes nothing happen: it survives
In the valley of its making where executives
Would never want to tamper, flows on south
From ranches of isolation and the busy griefs,
Raw towns that we believe and die in; it survives,
A way of happening, a mouth.
W H Auden ‘In Memory of W B Yeats’

All norms of other kinds of discourse are changed when absorbed by a poem.
Veronica Forrest-Thomson (intro to Poetic Artifice)

In the internet age, where we are at liberty to download such a plethora of texts – to reproduce them, recycle them, change their appearance by altering font, typeface, spacing, size – context and framing become the key elements.  The poet’s role has become, in the literal sense, that of a word processor, finding how best to absorb, recharge and redistribute the language that is already there…
What, in this new poetry, has happened to the authentic voice?...  The fabled ‘sensitivity’ of the Creative Writer gives way to a sensitivity to language that is almost like a fever – a sensitivity that has been the distinguishing mark of the poet from the Troubadours to George Herbert… Emily Dickinson… Susan Howe..
Marjorie Perloff in PN Review, on poetry as the language art

[The] search for images and symbols adequate to our predicament.
Seamus Heaney, ‘Feeling into Words’, Finders Keepers

I am interested in what activism can learn from poetry…. I believe failure in activism is often a deficiency of lyricism—an inability to collapse time and distance, a refusal to surprise or “make it new,” a willingness to calcify into rigid and limiting expectations, a closure to self-transformation, an unconsidered we or you, to name just a few. I believe social quests for freedom have much to learn from freedom enacted on the page. And that this conversation should happen on the level of reading and not, as it often is, solely on the level of intention…
It’s a conversation that should happen especially with erasure, the most blatantly political form of late. Erasure may well be the closest poetry in English has gotten to role of the state.
Solmaz Sharif from the erasure issue of Evening will Come. Thanks to Sophie Mayer who told me about this piece which also contains much interesting material about erasure as a poetic device, highly recommended.  And then Ron Villanueva mentioned it on the panel – it’s a reference point.

No one who reads much contemporary poetry in English can fail to notice that there too the moral positions of the authors are sometimes taken as evidence of an artistic seriousness and accomplishment that the work may not in fact bear out.  At times we seem to be reading virtue rather than poetry.
Sean O’Brien in the Guardian (review of Centres of
Cataclysm)

Why does diversity in poetry matter?  … Poetry has the potential to hold up a mirror to society; at its best, it has the ability to show what a society may become.
Nathalie Teitler, intro to Ten: the New Wave

One of the things the tyrant most cunningly engineers is the gross oversimplification of language, because propaganda requires that the minds of the collective respond primitively to slogans of incitement.
Geoffrey Hill in the Paris Review

The history of Europe in this [last] century is full of those terrible events supposed to have traduced or contaminated language, along with those sorrowful bystanders, perched upon some peak of purity, who can bewail the loss of a model of rational, passionate and poetic discourse that would somehow resist the ruptures of historical process. But, how silly…
Human language is the tribal continuity of expressive human behaviour, and is marked in its very core by whatever depravity or nobility an exercise of linguistic analysis may discover within the human record.  If writers and poets think that language can somehow resist this involvement with the worst, while claiming natural affinity with the best, then they are guilty of a naïve idealism that ought least of all to attract those who know how language works and what it can do.
J H Prynne (quoted in a recent LRB piece by Robert Potts)

Every beginning
is only a sequel, after all,
and the book of events
is always open halfway through.
Wisława Szymborska, View With a Grain of Sand

Degas to Mallarmé: I’ve got good ideas for poems but can’t find the words.  M to D: “It is not with ideas, my dear Degas, that one makes poems. It is with words.”
From the Perloff PNR article.

[Climate change] is like death, no-one wants to talk about it.
Amitav Ghosh quoted in the Guardian recently; not a poetry
reference, I couldn’t find one...

Contemporary poets do not aspire to ‘greatness’; the role they are meant to fulfil is the role of the earthworm.  The soil of the earthworm is language.
Wojciech Bonowicz; from Modern Poetry in Translation

The hugely successful Book Fair has become an indispensable institution over the five (or six?) years it’s been going.  This year the team produced a Poetry Almanac containing listings for and descriptions of 190 poetry publishers and other poetry organisations.  There’s also a poem each from many of the publishers and a set of essays on poetry publishing.  The Almanac may become an institution too – it’s a very useful reference work of a sort that hasn’t existed up until now.  You can get it here. 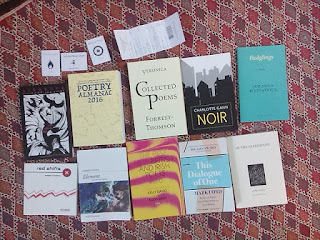