I first saw this year’s Forward Prize shortlists while experiencing a moment of internet access a very long way from London.  I noticed with pleasure that Peter Riley was on the main prize list; and wondered who Claudia Rankine was.  The judges looked interesting, chaired by AL Kennedy.  And not one, two but three graduates of the Complete Works programme were on the first collection shortlist...  Maybe the Forward Prizes were stepping off the poetry prize carousel?

By Monday night I’d read about a quarter of Rankine’s Citizen: an American Lyric (Penguin), more than enough to be thrilled when we came in late, having queued the whole interval at the bar, to see her on stage in the row of five.  (Shortlisted poets from America don’t always turn up – fair enough.)

Citizen presents everyday racism as Chinese water torture.  It’s emotionally electrifying and not like anything I’ve read in form or content.  It pushes the boundaries of poetry, veering from prose poem to lyrical essay to concrete poetry.  It’s ground-breaking enough to sweep definitions aside.  It’s mostly written in the second person, so that you – ‘you’ – become the subject of the many anecdotes and are also challenged by them to think about your own attitudes and behaviour.  Interviewed on stage, Claudia Rankine said that poetry is the realm of feeling and the book is about intimacy.  She had asked people to tell her about moments in everyday life when they felt bad.  The intention is that readers should feel what these individuals felt.  ‘You’ is unstable, she said: it can be accusatory, a call, intimate, general; can become a space rather than a pronoun.  She reminded us of the slights President Obama had suffered, such as the calls for his birth certificate.

There’s a short extract from Citizen, which is published by Penguin, here.  See Dave Poems for a review.

It was also good to hear Peter Riley, an English modernist whose poems contain landscapes and journeys both physical and political, read from Due North.  And three poets from Ireland (or rather two since Paul Muldoon was stuck in the US lecturing): Eiléan Ní Chuilleanáin and Ciaran Carson.  To focus our attention on less widely read authors such as Riley and Ní Chuilleanáin is one thing prizes should do.  Another first was that three of these poets’ books are out from middle-sized publishing houses, Ireland’s Gallery Press and Shearsman.

There was a storm of applause when Citizen won.  It felt like a breakthrough moment.  First ever black female winner of the Forward main prize.  We were applauding the woman, the work and the symbolism.  Like the reception last year for Kei Miller, first ever black poet to win.

This year’s First Collection Prize will be memorable too, as the year the Complete Works generation came of age.  Five vivid and memorable books, five excellent readers; and three sets of vertiginously high heels as if in a game of dare.  It was exciting to hear the three Complete Works authors read, in such circumstances, poems I’d read several times on the page. Sarah Howe’s reading of ‘(c) Tame’ gave me the shivers, Karen McCarthy Woolf conveyed the precise madness of bereavement in ‘The Registrar’s Office’, and I was delighted that winner Mona Arshi chose to read ‘The Daughters’ which was published last year in The Rialto.  I enjoyed in a different way hearing Andrew MacMillan and Matthew Siegel read, as an introduction to their work.

If the Forward Arts Foundation didn’t exist we might not believe anyone who proposed to invent it: a private foundation whose purpose is to support poetry and talented poets and to inspire a love of poetry.  A philanthropic poetry godparent.  Really?  In the UK?  I’m not sure we appreciate it enough...

Anyway the Festival Hall stalls were full last Monday night, the sense of occasion heightened by a glamorously orange-lit stage – same shade as the trousers worn by singer/poetry lover and stand-in for absent poets Cerys Matthews, unless that was the lighting.  She, founder-benefactor William Sieghart and judges’ chair AL Kennedy all played their roles becomingly modestly and our grumbling (no actors to aim at this year) focussed on the over-explanatory MCing of radio and TV personality Kirsty Lang.

My main motivation for writing about Monday’s ceremony is that nearly two years ago I did an audit of shortlists, winners and judges of the TS Eliot Prize and Forward (main prize only) and concluded that poetry prizes were a carousel.  So this is to mark progress since then.  Forward Director Susannah Herbert deserves much credit for listening openly and constructively to criticism of prize culture (and of previous years’ staging of the Forward).  The way the Forward Prizes are developing ought to put some pressure on the TS Eliot Prize.

The week’s other treat was the Free Verse Poetry Book Fair with over 80 publishers cramming into Conway Hall, the lack of elbow room a symptom of the expanding scene and the fair’s success.  Who would think that poets and their friends, customers etc (often also poets in another, very different carousel) could make so much din?  As before, major publishers such as Bloodaxe and Faber were next to the middle-sized, the small and the smallest, from Arc or Blart to Veer or ZimZalla, and Hercules to Isobar or Katabasis.  There was a translation focus this year and I was sorry that the Poetry Translation Centre’s reading by Sudanese poet Al-Saddiq Al-Raddi was known about and listened to by so few.  He can fill a stadium with four thousand people at home…

The stalls were a delight to browse for look as well as contents.  My favourite thing of all was Sidekick Books' moth-poem visiting cards.  I've nicked a photo off their Twitter feed, right at the end of this.  The Rialto had a stall too so I played stallholder for a bit (it felt like playing shops).  I didn’t buy so much this year but went away as usual with my mental map of poetry publishing enriched.  And with the lovely catalogue, like last year’s no throwaway object but a publishers’ index and anthology combined.  All hail to Chrissy Williams, Joey Connolly and their team of volunteers.

Smaller publishers still struggle to enter books for poetry prizes.  I’ve asked a handful of them about what barriers they face and what might make it easier for them.  To follow shortly. 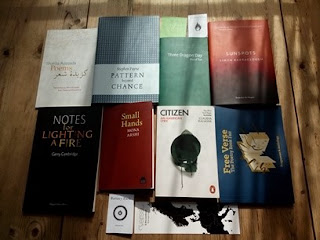 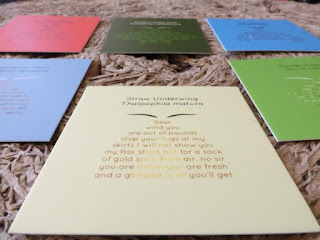