I was walking through a landscape of walls and doors but I couldn’t find the festival.  In one room with a grass floor there were people sitting at rows of desks.  Nothing was happening.  I looked for tea but there was only a jug of water and some small glasses: the thing to do was put a sugar lump in the glass, pour in water, shake it and drink.  Through a wall there was a road with brick terraces on either side leading towards a narrow streak of blue water but it was unreachable.

This was about a week ago.  Anxiety dream about not finding a poetry festival (or the refreshments) or being bored?  Overstimulation seemed much more likely, I thought when I woke up.

And of course the reality couldn’t be more different than that anti-festival.  Last night, for example: Alice Notley at the Byre.  It’s true the Byre Theatre might not be easily findable without its sign because it’s concealed by layers of stone: through an alleyway whose entrance is a tunnel in an ordinary row of houses, across a stone-lined courtyard with a large and old cherry tree, through an archway and over a courtyard garden.  Then the theatre building’s a modern explosion in a space that, when you’re inside, seems too small for it, partly because of the curves and layers and levels.

Alice Notley must have read for around 50 minutes, not that I realised that until afterwards.  She put such relish and energy into the reading.  There’s something about the shape of a small theatre space which adds to intensity, provided it’s there in the first place – the rounded layers of seats reflecting things between reader and audience in a way that makes a normal room seem two-dimensional.

Negativity’s Kiss was the name of one book she read from.  It’s a story, of sorts: hardboiled metaphysical poetry, with the crazy vividness of a graphic novel and plenty of intellectual slapstick.  The principal character is called Ines, short for Inessential; there’s a cop called Cop, short for Copernicus Smith, a Bob Dylan-like Orphée and a gangster called Hooded or Verball (stress on –ball).  Lots of people want to kill Ines.  This is her speaking:

Is Chaos imagination? It’s pre-
Imaginary… But then I have no choice
but shapes of words, their chemically
formulaic sonorities, and at the front of my
tongue a

kind of impersonation: a having to be a
person.
Inhabit a space called Visionary:
its procedures and textures are a tradition
but are you really in a vision? If you say
you are

Am I everted? if I say I am
Is there Chaos if we say so: we’re calling
what that? 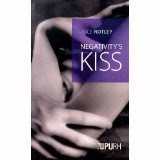 Someone behind us was reminded of Anne Carson, and had a point – metaphysical themes, classical references, delight in aspects of popular culture and mixing all those up together; sheer braininess.  Notley is full of phrases and ideas that I want to roll around in my head like sweets: “What’s your solipsistic address?”  “Who has changed as a consequence of anything they know?”  “An open letter from every religion to Ines Geronimo.”  A character in one poem has “hair like grey fire”.  So does Notley, it rippled as she read.

That was near the end of a day that started with seagulls.  Their cries early in the morning have a cyclical nature: they rise to a crescendo, fade away then start again, an alarm on snooze.  First sight was a pre-dawn sky through a criss-cross of bare branches and blind slats, and beyond these a stone wall of houses, early risers’ lights in tall windows.  I’m staying with several others in a stone cottage down a wynd, a zigzagging alley with shoulder-high stone walls on either side.  Wynd is pronounced to rhyme with find, not finned.

To start the festival’s day poet, translator and festival co-founder Anna Crowe took a huge group of us to explore St Andrews, reading (mostly) poems at points such as the Scottish meridian line.  This line in the pavement commemorates 17th century astronomer James Gregory, who laid a meridian line on the floor of his lab two hundred years before the Greenwich meridian was adopted, and several degrees west.  Crowe read a Donne meditation there, with passion enough to overcome passing traffic and a builder’s radio.  St Andrews is full of elegant stone houses and enclosed in some of them are courtyards like the Byre one, lined in stone with trees.    The stone is paleish, sometimes with a yellow or ruddy tinge and overlays of black; irregular blocks in the older houses, perfectly-fitting stone walls.  The town has a high student population – a mix of Scottish and southern accents in the shops.  There are bookshops, with festival-themed windows.  Or maybe they always have poetry in the window here…  There are also charity shops which festival visitors are scouring for books.  I haven’t done this yet but suspect the books are all gone by now, otherwise I’d be keeping quiet.  Festival reader Kim Moore scored highly on East Europeans: Miłosz and Holub.

There was a lot of coastal poetry yesterday, to go with the archipelago theme of the festival.  Shara McCallum, first reader of the first day, told us she was attracted to shorelines and other places on the edge.  She can switch between her native Jamaican and adopted American in an instant, depending on the poem.  Jamaican for the enticingly quotable voice of Calypso:

Keep one Greek boy call Odysseus
inna mi cave. Seven years
him crooning in mi ear and him wife nuh see him face.
The two of we was a sight fi envy.

As for what he told Penelope,

him tell her is force I did force him fi stay
and she believe the fool. But lawd,
woman can also blind when she please.
My friend, I tell yu,
I is too old for all this bangarang.
I hear over Trini way, young man is beating steel drum,
making sweet rhyme and calling music by my name.
Well, that the only romance I going give the time of day.
Hmph. 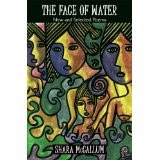 Easy to forget how much of his wanderings Odysseus spent on Calypso’s island.  Another powerful poem McCallum read that I don’t think is in The Face of Water, her new & selected from Peepal Tree, had the speaker standing in icy reeds while her husband skated out to the centre of a pond where she felt sure the ice would crack.

Regular Stanza-goer Helena Nelson – she can commute to the festival, lives only a few miles away – had recommended the Past & Present sessions, in which two poets each talk about a poet of the past whose work they love, make him or her part of the festival.  Poet-to-poet enthusiasm is always inspiring and so it was with Sheenagh Pugh and Thomas Wyatt, whom she’d fallen for aged 12.  She read some of his poems very tenderly and by heart.  One of the attractions was the irregularity of his iambics (she was teaching herself metre at the time).  After his death, several editors (several!) had a go at regularising them.  What tin ears they must have had.  She saw Wyatt as a sort of proto-Donne, ideas spilling out onto the page and confusing the syntax in their urgency.

Jamie Reid Baxter introduced us to Elizabeth Melville, a Jacobean poet from Fife and the first Scottish female poet to appear in print.  He read us a love poem… and told us afterwards that the ‘you’ addressed was God.  Using popular modes for sacred purposes is called contrafactum sacrum.  (There are only two entries for this exact phrase in Google, neither of which explains it.)  He sang us some of her poems, beautifully and with practised ease.  Listening to the Scots (if it’s linguistically correct to say she wrote in Scots) was also a pleasure – when is any transformation of English not, in poetry?

Sacred and profane love came up again in Glyn Maxwell’s Stanza Lecture... which was on the stanza, drawing on his book On Poetry – the black and the white space.  Bono, he said, had pointed out that the ‘you’ in Bob Dylan’s religious songs could just as well be a woman.  Maxwell said that great poets’ best poems were often among their most irregular in form, for example Matthew Arnold’s ‘Dover Beach’ or WH Auden’s ‘Musée des Beaux Arts’.  A strength of the Gawain Poet’s work was that every stanza is a different length.  You know the rhyming, short-lined bob-and-wheel’s coming at the end of each, but you don’t know when: see also life and death.

Another treat was hearing Anne Stevenson read.  The precision of her voice with its slightly American r’s and o’s matches the precision of her wording.  The opening lines of the first poem she read, ‘Making Poetry’, see here for it all, could be a festival mission statement:

‘You have to inhabit poetry
if you want to make it.’

Today there’s a lot more inhabiting to do: starting with the first of the Poetry Café Breakfasts, today on the other festival theme of Unfinished Business, and ending with Carolyn Forché and Paul Durcan and then an open mic, entitled… Risk A Verse.
Posted by Fiona Moore at 08:51