God Loves You by Kathryn Maris

Why people believe something tends to interest me more than the detail of what they believe.  That’s certainly the case in this week of women bishops, when some Church of England women spoke out against the proposal during the Synod debate.  The deeper reasons that come to mind are psychological rather than theological, and I’d love to come across a play, a novel or poems that explored them. 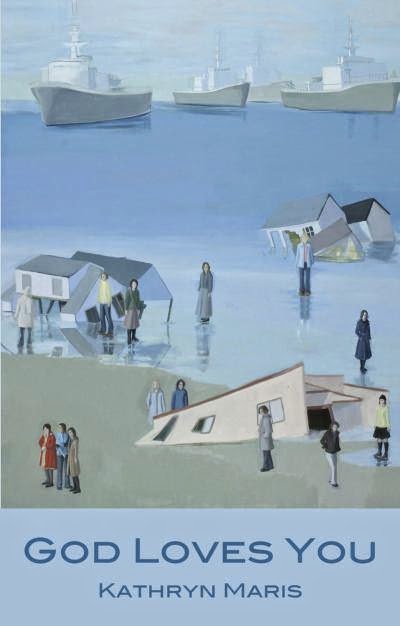 God Loves You  is full of states of mind both contemporary and ancient, in language and rhythms to match, the ancient ones drawn from the Bible, authorised version.  This combination may be why the book got under my skin.  It’s not like any other book.  I’ve wanted to write about it for a while, but was inhibited because I know Kathryn Maris.  I’m writing about it anyway.  That’s a dilemma Maris’ droll, agonised, slyly confiding voices could dramatise perfectly, though they are concerned with more fundamental issues, often sins both great and small: jealousy, spying on neighbours, rivalrous parenting, husband-stealing.

The biblical angle can allow a speaker to come straight to the point, while also making old truths about human nature sound new, as in the opening lines of  ‘Why I Will Gladly Take Your Man Away’:

Because there is time
and because I can claim Him and then declaim
to you, ‘I know not what I do’,

The capital H is no accident; God can get mixed up, mostly with  husbands etc, and this speaker goes on to say:

if you’ve got God, then watch Him hard
because I will take Him if I can

So religion gets sent up mightily, along with our more secular preoccupations.  The book, which is carefully ordered, has an epigraph from Ted Hughes: “Crow realised God loved him – / Otherwise he would have dropped dead / So that was proved.”  The middle section contains several prose poems in biblical verse form, full of surreal truthiness.  Women carry boxes full of grief or demons and meet men, angels, kings, God.  Bible stories meet folk/fairy tales, with a dash of William Blake.  From ‘God Loves You’:

4. On the second day, there were finches
in the air.    I saw with my own eyes this
flock yield the form of a heart before me.
5. The next sign, too, was full of meaning.
It was a sign.   And it was revealed to me
thus: the Damut Estate. And in that name
I read these words: ‘Deus te amat’.

That’s a fairly harmless example, but underneath the arbitrary twists and turns in some tales there lurks something nastier, the logic of the witches’ swimming test.

Maris uses form expertly.  Iambic pentameters in ‘Will You Be My Friend, Kate Moss?’ convey breathless celebrity-worship. The premise of the poem is that both KMs have daughters in the same ballet class.  This mother’s thinking like a smallish girl:

We have so many things
in common, like you’re pretty much my age;
we share initials; the circumference of
our thighs is basically the same. (I checked.)

A sestina, ‘Darling, Would You Please Pick Up Those Books?’ is in the voice of a wife complaining about her author husband’s muse – the form works its repetitions round and round her desperate jealousy, like the hoovering which is the starting-point for her complaint.

The poem can be read in full here, with a commentary from Carol Rumens.

Then there’s ‘Knowledge is a Good Thing’, a dialogue with the devil, in full-rhyming couplets short enough to be really hard to do (shorter lines = fewer options).  Eve with a echo of Blake’s Songs of Experience, and many novels:

‘What’s his is yours.
Look in the drawers.’

‘I’m forbidden
to know what’s in them.’

‘Will I despair
at what’s in there?’

There is no shortage of emotional extremes in this book.  Individual exposures can be merciless but the overall effect is merciful, because of the empathy – each speaker is revealing us all.

Some poems tend more towards the spiritual, such as variations on the Greek 20th century poet Melissanthi; and metaphysical, such as ‘The Sun’s Lecture Notes on Itself, You and God’.  This is one of several that start each thought and/or sentence on a new line, like the Bible or Lyn Hejinian:

When I rise I see the humans in the park. They walk whichever way they walk. I see their progress in angles and vectors. Only God sees where they are going.
*
The inner sun burns differently for each human. This includes ardour.

*
…
The sky my colleague reminds you that the atmosphere is poison. But he believes in free will and a daily change of eyesight.

*
Partial awareness is hardly a gift, but totality is worse. We look on you and think this every day.

Maris is an American living in London, and a couple of poems refer to friends among her American poet contemporaries, Sarah Manguso and Nuar Alsadir.  It’s hard to identify how the influences come through when her voice is so original anyway.  There’s an emotional boldness about the dramatic monologues which feels American, coupled with the ability to make large statements without sounding lame.  Also a certain brand of wacky surreality, as in  ‘I Imagine We Will Be Neighbours in Hell’, which has a quote from Manguso as its epigraph.

You can water your stone plant
and I’ll climb stairs that hang in my vacant world.
We’ll know our neighbours, we just won’t know
they are our neighbours. Hell could be that:
ignorance of the proximity of our neighbours.

I’ve just leafed through God Loves You.  There are around fifteen more poems I’d like to quote, and I’ve quoted seven already.  That’s a lot of stand-out poems.  It’s also a sign of how varied God Loves You is, though it’s a very coherent book.  At the other end of the spectrum there are few poems whose impact is weaker.

God scatters where he eats,
The sweeper wheels his cart to what falls.

The broom assembles a pile.
The wind dismantles the pile.

God is the messy wind. The pile
is the mouthpiece of the wind.

I ask if I’m loved.
He points to the graveyard his garden abuts.

I clutch his hair. I say Am I loved?
He claims his love for me is deep

‘Bright Day’ is a small poem which could act as a manifesto for the whole book.  A mother stands her children outside, 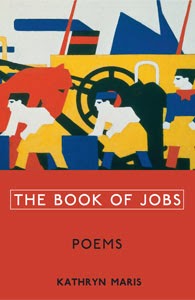 and I teach them to recognise
a ‘God Day’ when they see it.

But next time it happens,
they shout, ‘It’s a Mama Day!
She says she can see God.’

Does the CofE’s General Synod have a poet-in-residence?  Here’s an excellent candidate.

God Loves You was published by Seren in 2013.  The blurb on the back, which you can read here, quotes a couple more favourites.  Maris’ first collection, The Book of Jobs, also very original, was published in the US by Four Way Books; there's a sample here.