Aldeburgh Poetry Festival: this year, the dawn was red

For the first time ever, we stayed in a house by the sea (the letting agency had a sale).  That long, higgledy street of mostly gentrified seafront houses is nothing but a row of windows on the dawn.  Saturday morning’s sun came up behind a woolly line of small dark grey clouds, giving each a sharp red border that brightened to orange: heavenly sheep.  Sunday was the same, but with bigger clouds: mansions of Atlantis, though rising from the North Sea.

The sea between us and all this was grey and non-committal... a bit like the attitude of the Poetry and Beauty panel on Saturday morning.  Oh, how difficult beauty is.  Prompted by chair Robert Seatter, who’d done his homework, they came out with the usual stuff about how beauty has to have another context now, how it can’t exist without brokenness, how we now pay attention to trivial and ugly things, etc.  All of which was fine, but we knew it, and have done for years.  I wanted them to ask things like: what would be their poetry equivalents of, say, Rachel Whiteread or Michael Landy?  What’s beauty in the internet age?  And to take us a stage further: what will beauty be next?  Though their awkwardness on the subject was promising – maybe it’s a clue that beauty however defined is a place to go, to challenge current assumptions. 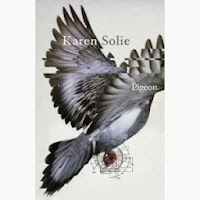 I always expect a lot of those big-subject panels at Aldeburgh, with some of the weekend’s best (this one had Katha Pollitt, Terrance Hayes, Vera Pavlova and Ian MacMillan); the outcome often disappoints.  More insights seem to come from the Short Takes, by one person on the same big theme.  Karen Solie, brought up on a Saskatchewan farm, was not afraid of the sublime.  Her starting-point was the damaged prairie landscape she was born into.  Beauty was pattern and form wrought from the chaotic and unreasonable, from drought and infestations.  (Turn on the tap, and out might come body parts of crickets.)  Beauty was also old machinery half-buried in snow.  Making beauty is an act of imagination – something out of nowhere/nothing, like farming in that landscape – and making it into poetry is a tightrope walk between sense and mystery.

That talk shed light on Solie’s poems.  One of the points of Aldeburgh is to go to hear someone you really want to know more about.  I discovered her in Magma around 3 years ago, wrote my first ever blog piece about her work (here), and presented one of her Magma poems, which had blown me away, at the Poetry Trust’s Aldeburgh Seminar.  It’s in the new Bloodaxe Selected, The Living Option (p.136).  I love the way she draws many diverse elements into a poem – her reach is prairie size.  This is the end of ‘Affirmations’, one of the new poems in the Selected.

Won’t nighttime return and won’t it be familiar?
Unequivocal through Carolinian Forests
which have not wholly disappeared,
and equally among rows
of wrecked cars in the junkyards,
hoods open like a choir?

Only someone on speaking terms with the sublime can do rubbish that well.

The man pulling radishes
pointed my way
with a radish

Nurkse (now we know the D. is for Dennis) commented that in the 19th century, people gave readings of other people’s poems; today we give readings of our own....  His take on beauty made me more interested in, and open to, his reading; now I’m wondering how to apply this thought.  What if readings conventionally took this format: people read others’ poems in the first half, explaining their choice, and their own in the second half?

Nurkse told us of a lost/gained-in-translation experience.  A line of his,

Even the grass is singed

[singed to rhyme with hinged] got converted to the Spanish for:

Even the marijuana is melodious

I’m now reading, with much pleasure, his earlier book Voices over Water, and have been searching for the line, for fun, to see how its mistranslation would look in context.  I don’t think it’s there, though  it would fit; part of that book is set on the Canadian prairie, which makes me wish for a Solie/Nurkse conversation on prairie influence.  This is from ‘The Well’:

Am I rich or poor? I tilled one furrow
until the horse dropped, but the wind erased it.
I had to find my way home by Polaris.
All that grew was wasted time, each speck of dust
ripened to a cloud: it took a year
to strike water.

That book was shortlisted for the Forward Prize a couple of years ago, and small publisher CB Editions has just won, for the second time, the Aldeburgh first collection prize with Dan O’Brien’s War Reporter.  Despite this success, CBe is going (I think) into hibernation – unable to get a grant for marketing etc.  Where better for Arts Council funds to go, than to help a discerning small publisher expand its sales?

Anyway, back to Poetry & Beauty (sounds like an allegory).  Soon after the panel talk, D A Prince and I bumped into each other, agreed it had been less than inspiring, and then,

Davina: But I had an Idea during it.
F: Oh, I did too!
D: So the event was a mistake, but it was a creative mistake!

That came from Terrance Hayes’ talk on influence – an aside on how influence can lead one along the wrong route, but how that, and the discovery of the wrongness, can be creatively helpful.  Again, it was good to hear him talk before his reading, and on such a rich subject.  A couple of other things he said:

Lowell, on envying Bishop’s ‘Armadillo’ and writing ‘Skunk Hour’: “Breaking through the shell of my old manner”.

More good things... the Close Readings.  Michael Laskey stunned us in Aldeburgh’s Baptist Chapel, the original festival venue, at 9am on Saturday morning, with Chase Twichell’s poem ‘Aisle of Dogs’, which begins:

In the first cage
a hunk of raw flesh.
No, it was alive, but skinned.

Michael took us deftly through the whole poem – in ten minutes, so he had time to read it again.  There we all were, sitting in chapel rows, with aisles, listening to him talk about the connotations of “aisle”.  I’ve since been reading Chase Twichell’s poems online, here and here – what a great discovery.

Kim Moore close read ‘For the Sleepwalkers’ by Edward Hirsch, whom I know better as the author of How to Read a Poem – a good book to pick up when poetry seems like a waste of time, you can sample it here.  Anyway, having heard her as one of four excellent and very varied pamphlet readers, and got her pamphlet, If We Could Speak Like Wolves, I could see why she’d chosen it.  The enhancement works backwards, too.

Vera Pavlova examined a one-line poem by Vladimir Burich.  I don’t know the ethics of quoting a one-liner.  But paraphrasing it would be worse.  This translation is by Steven Seymour.

Life is as simple as a spaceman’s breakfast

When you can’t write rhymed verse because it’s politically suspect, what better response than to remove all lines except the first?  Burich was unable to publish until perestroika, when he was 50.  As Pavlova pointed out, the line itself is like the tube of breakfast and the tube is like any lyric poem: concentrated, maybe simple, yet supported and surrounded by complexity.  Yet again this made a good introduction to Pavlova’s own epigrammatic poems.

There was an East European theme, linked to the new issue of Modern Poetry in Translation, including talks on Polish poetry and what happened after the Wall came down.  I could have spent the whole weekend listening to such stuff.  The attendances were good: Aldeburgh’s short on insular monoglots.

Wojciech Bonowicz quoted a Polish poem from 1989 which predicted various manifestations of heaven on earth, including “The streets will run with meat”.  Meat: which there was always a lack of; which the fortunate brought furtively into the city from the countryside in bloody plastic bags; whose lack was symbolic of the communist authorities’ failure to serve the workers, and was one cause of serial rebellion.

The poem’s irony seems to have been confounded, in literary as in material life: Polish poetry is flourishing.  Freedom was a space in which one could do anything, Bonowicz says in his article for MPT.  [Rather than a space in which no-one knew what to do.]

Aldeburgh this year was a careful blend of voices, without any one that stood out.  Part of the pleasure came from the juxtapositions – which create endless possibilities, and give a run-up to impossible poetry jumps.

There are always losses – in a parallel world, I’d have gone to talks on David Jones and on surrealist poetry, and wouldn’t have missed Richie McCaffrey’s short take and various other short talks.  Podcasts, please.  I’d have attended the Rialto-sponsored Masterclass (it clashed with Eastern Europe) proudly wearing my Rialto hat and because it’s always fun.  I would have not gone to a couple of events / parts of events.  I would not have got myself spring rolls from the Chinese takeaway in Aldeburgh high street at 10pm on Friday night when the Cross Keys had stopped serving food and there was nothing else in town to eat, though eating them alone on a dark bit of the seafront with freezing/burning greasy fingers was OK.

Maybe I wouldn't have caught a festival cold if I hadn't swum in the icy, icy sea on Sunday morning, but I'm glad we did.

My last loss was the result of a dilemma: catch the end-of-festival bus back to Aldeburgh, on time for once and likely to be packed, or wait for the busy staff on the mini-bookstall (the main one had closed!) to get Macedonian poet Nikola Madzirov’s book, Remnants of Another Age, Bloodaxe again, out of a cupboard.  I caught the bus.  He and Solie had a great conversation about poetry and music; they both started off writing song lyrics.  This is from Madzirov’s ‘Home’.

I lived at the edge of the town
like a streetlamp whose light bulb
no one ever replaces.
Cobwebs held the walls together,
and sweat our clasped hands.
I hid my teddy bear
in holes in crudely built stone walls
saving him from dreams.

The poems in that book are translated by Peggy and Graham W. Reid, Magdalena Horvat and Adam Reed.

A sense of dislocation doesn’t only come from places like the Balkans, where Madzirov said the question was ‘war or wall?' and younger poets made their own networks that crossed the invisible barrier between post-Yugoslav states.  Here’s Alison Brackenbury in the Poetry Paper, talking about landscape:

‘What care I for house or land?’ asks the Lady of the Lincolnshire Mummers’ Play.  Her words were scrawled in a notebook of sheep remedies, found in a dark house when the last shepherd, my uncle, died.