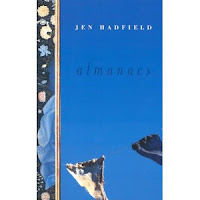 The dog from Jen Hadfield’s eponymous poem appeared in my sleep the other night. Or did he?  I’ve got flu, and don’t know anything any more.  It’s a great first line / idea, both vividly realistic and dreamlike.  The poem is from Hadfield’s first collection Almanacs, published (Bloodaxe) in 2005, which I got hold of because someone claimed it was better than its TS Eliot prize-winning successor.  I’m not sure about that, but it’s good.

She describes light and landscape very well, and the experience of being there, how thoughts come out of it.  ‘Thrimilce – Isbister’ is only nine lines long, it could be an act of vandalism to quote part of it but the whole poem is here.

Cheddared, the light sealed
in rind of dry road;
bloom and sheen of the ditches
I’ve been dreaming all this life;

There’s plenty else going on in the book, though I didn’t get the Tarot references until I’d read the blurb on the back (put it down to the flu).  The language is the most interesting aspect of all – Hadfield’s use of language is brilliant and original.  Both those quotes give a sense of how she uses simple, though not necessarily common, words to make something new.  I think she uses very few Latinate words.  (Somewhere, someone must have invented a computer programme to analyse this.)   This suits her adopted landscape of the far north, untouched by Roman boots or weather.

Other reading while in bed: William Letford’s Bevel, which is very enjoyable; see also the Carcanet New Poetries V anthology, which I think contains most of the best poems in this collection.  Coleridge.  A novel called Swimming Home by Deborah Levy, written in a sort of British magic realism.  One bit of possibly undeliberate unrealism is that one of the central characters is a London-based poet, who lives more than comfortably off his royalties.  Is that what novelists (and their editors) think poets do?

I’ve been musing on the absence of flu from poetry.  All that physical and psychological misery, unexploited!  But who would be well enough to write it, and who would want to read it?  It feels as though my breath doesn’t belong to me any more – instead it belongs to the Bank, who regularly threaten to foreclose.

OK, all breath is on loan… now we’re talking poetry.  Anyway, I googled ‘poetry about flu’ and it was all comic.  But at least the subjects Google offers when one types in ‘poetry about’ are what they should be.  In order:

Shame about the absence of men – a by-product of the male canon?  And the absence of cities – perhaps a by-product of what people think poetry should be about, but also what they would go to it for.  ‘Music’ seems a strange entry, so high up.  In my current state I appreciate it that death comes before love.  Now I’m going back to Jen Hadfield’s Orchid Dog for consolation.

He raises a field-full of white gulls,
shadow bruising a bloated sheep.
He jerks and swings a mouthful of rank ribbons.


PS: someone's pointed out that Michael Donaghy wrote a poem called ‘My Flu’. You can read it here.