Three screens in a row, same film running on each, a wide black-and-white seascape.  A seagull flies from left to right, dark against the light reflected off the water.  It flies across all three screens at once.  The only other movement is the crawl of the waves, until a much more distant bird flies across from the right.  Music: haunting, elegiac, a bit chilling.  The sort of strings where you can sense the gut vibrating.
A Titanic made of ice, melting.  (Or rather three: the three simultaneous screens.)  The four backwards-slanting funnels melt first, into little peaks.  The ship slips about as it sinks into its own puddle.  It could be any size - full-scale, blockbuster film model-in-a-pool, cocktail ice-in-a-glass. 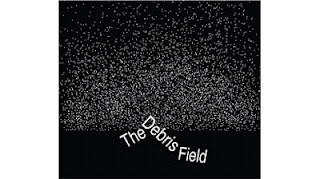 Rivets: one cause of the ship’s undoing.  The boss’s obituary for a Belfast riveter who died during construction, a useful man.
A silver teaspoon (or rather three) falls, further than any teaspoon would normally fall.  Much later, it falls again.
The Titanic looms in from the left, a vast black bulk, maybe just departing.
The sea keeps coming back, in widescreen and in close-up bubbles and wave-patterns, on the surface and down below.  Sea as sea, sea as abstract.  Music intertwines with the three speaking voices, and does all the things sea music should do - surge, fade, resurge.  Every now and then there’s a sinister sound too, as if of mechanical disfunction, something that’s got stuck.
A child recalls how her father gave her a kiss as he lifted her into the lifeboat.  She uses the language of first or second class, not steerage.
Voices describe the impact, each differently.  A slight jar.  Like calico tearing.  A grinding sound.
Beforehand, the sailors could smell ice nearby.
At the beginning we are counted down into the debris field, into the deep, one to ten.
At the end a white phrase is flashed up on the three black screens, over and over again, each time in a different language.  Each time in a different place on the screen, like white horses appearing here and there on a calm sea.  What was the phrase?  White… unforgiving (?)… of the sea.  It’s gone, but the feeling remains.
Those are some of the things my memory has salvaged from The Debris Field, 45 minutes on the sinking of the Titanic with text by poets Simon Barraclough, Isobel Dixon and Chris McCabe, music by Oliver Barrett and film by Jack Wake-Walker.  There's a one-minute demo video here.  I tried to upload it, but aborted after a 15-minute wait - internet connection so slow I'm not sure I can post at all...

What would the voyagers have made of us, rows of people crowding an upstairs room at the BFI on Saturday evening, 100 years (less a few hours) after the iceberg struck? wondering what we were about to experience, with three blank computer screens in front of us.  And what would they have made of the debris field that’s accumulated in those 100 years, the history, the myth, the changing perspectives?
The Debris Field film shows us all this, aslant.  It somehow makes its way through the Titanic ice-field, avoiding cliché.  Of course in 45 minutes there were a few bits that I felt worked less well, but my immersion was so deep they didn’t matter.  Maybe the key to the success of this collaboration is that its creators have trusted the audience to make sense of it ourselves.  We all have our own version of the legend - the things that went wrong, the class-based chances of survival, the opulence and poverty co-existing on board, the hubris of unsinkability.  The aftermath, the films, the discovery of the wreck.  We can all make our own connections.
For example, it would be easy to turn The Debris Field into a commentary on modern times - everyone gets sunk, and then the rich escape.  Instead we get a very brief reference to all this, a Titanic disaster-description mingled with a news report on crash economics.
The text combines words of the three poets with quotes from the Titanic archive (so to speak) and from sea poetry of the past.  There was that wonderful bit of The Ancient Mariner when the ship sets sail and the crew see their familiar landmarks drop below the horizon.  Milton’s Lycidas was there, and Brecht, whom I missed, and I’m sure others I missed too.  Oh, and Cabaret.  The poets read live, though some of us didn’t realise this at first.   Their voices and the film, also a collage, blended into a whole with the music.

I watched The Debris Field uncritically, in the sense that I didn’t think about how the collaboration worked. Afterwards, my expert neighbours were debating whether the text came first or afterwards.  That they couldn’t agree is surely a good sign.  In fact, according to Chris McCabe, the three poets wrote their text, and then gave the script to composer and film-maker to work in parallel.  There was a month at the end to adjust image, words and music all together.  The Poetry School blog has a good account by each of the three poets.
I’m sorry I haven’t done the poets’ words justice with any quotes.  I must have had a notebook on me, but I didn’t want to write anything down, it would have broken the immersion spell.  One of the good things about this event was the mixing-up of poetry with other worlds.  I didn’t know many people there.  The old friend I went with is a theoretical physicist, who enjoyed it as much as anyone.
I hope it gets shown again soon.  I’d like to go again - it would be different the second time, new things would emerge from the debris field.

PS: the white phrase on the black screens was:

The white extent of the eternal sea
Posted by Fiona Moore at 22:02