Spring and The Rialto 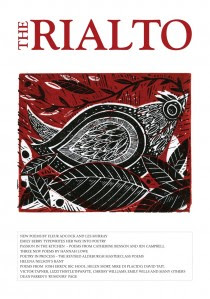 One thing March brings, along with the sun finally back in my garden, which is on a hill facing north, is some good poetry magazines… this week, it’s The Rialto.
Perfect for reading outside in such wonderful weather, surrounded by tulips, hyacinths, general ungardened mess, forsythia and white cherry-blossom against blue sky, great-tits, blackbirds, dunnocks, train noise, car noise, wood-pigeons, human voices on the railway bridge, seagulls, sparrows (new!), robins and a very insistent wren; but alas, this year no song-thrush to imitate by reading aloud Tennyson’s ‘Throstle’ on page 1:
I know it, I know it, I know it.
Light again, leaf again, life again, love again..
There’s a lovely lino print on the front, by Amanda Colville, and the inside cover picks it up in Pompeian red.  And then - on page 10, the regular poems start with this:
Down with poetry!  It’s all over the place,
clogging up the drains, pretending
to be special.  It’s printed on demand,
when there is no demand.
That’s the beginning of ‘Rant’ by Helena Nelson.  It’s entertainingly long, as a rant should be, and feels like a spontaneous outflow (more likely this is a sign of craft at work).  It has a go at everything from poetry magazines to line breaks, from MAs to lack of embarrassment.  And at blogging, with which something unpleasant rhymes.  Apart from that, the only line by which I can’t be persuaded is the last one, “bring back writer’s block!” …and disagreeing with that undermines my agreement with much of the rest.  Very nice.
The way to recover from such an attack must be to print something really good straight afterwards.  On the opposite page is just that, a poem by Chrissy Williams called ‘JON SPENCER BLUES EXPLOSION in the Spring’.  I’d love to type it all out.  Here are a few lines from the middle:
At the shady crossroads tall trees SPENCER
lean in to watch our tiny car arrive BLUES
then all decide to pollinate at once.
EXPLOSION Every seed they have swims in the sky,
EXPLOSION so many flowers curling down..
It would have been a good poem without the capitalized interjections, but these lift it to another level.  Mood + music + landscape, all interact.
There’s lots of other good stuff in here.  Three sonnets by Hannah Lowe.  By now, her graphic, fluent poems have created a myth-like world of stories for her readers to enter, a world of love, loss, family, nostalgia for the mystery of the past and its strange characters.  Here’s part of ‘Swans’:
He carved your name in fried potatoes, spelt it
neatly on your plate.  On summer nights
he led you through the park, past empty swings and slides.
Below the orange haze of high rise light
he laid his jacket on the grass for you.  Swans were gliding
on the pond.
Other poems I’m enjoying include ones by Emily Wills, Richard Lambert, Sarah James, Jen Campbell and Josh Ekroy.  There are poems I don’t see the point of, but that’s always the case.  I’ll read the magazine again in a while, and will probably like some of the same ones, and some new ones.  Though I think I’ll still like all the ones I’ve named.
How many people, apart from other editors, read poetry magazines thinking about how they’ve been put together?  I notice when, for example, two kitchen poems have been placed opposite each other, but don’t look for the bigger picture.  Perhaps I should.  I’d love to know how editors do it - are there methods, hints and tips?  What makes a good magazine, apart from good poems and a touch of Pompeian red?  The Rialto’s editor, Michael Mackmin, must be about to share trade secrets.  His Arts Council grant has been renewed for 3 years, and some money is going towards an editors’ training programme.  What a good idea.  I hope he, and they, will share some of the process with us.
Writing about poetry magazines is a dodgy business, if one sends poems to them.  I have a soft spot for The Rialto as my first ever published poem appeared in it - on the same page as Les Murray!  Last November’s Aldeburgh Festival Masterclass poems by Jocelyn Page, Luke Yates and me are in this issue, along with the revised poems and our thoughts on the experience - which we wrote 3 months ago.  I hadn’t looked at my poem again until now.  Revising it was difficult; most things I tried just made it worse.
In that sole respect the Masterclass (which was an amazing experience, and surprisingly unscary) was like any other workshop, though with comments of a very high standard - I learned what other people saw in the poem, including its flaws, but only I could decide what changes to make.  The poem’s not quite there, so I feel I’ve failed everyone… and how strange, to have two drafts of one’s poem in a magazine.  Where else can one see this?
I’d better say, in accordance with this blog’s reviewing policy, that I know Michael Mackmin, Helena Nelson and Hannah Lowe.  And I do send poems to The Rialto…
Posted by Fiona Moore at 18:20