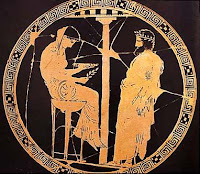 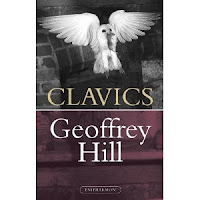 Clavics reminds me of the way some of my male contemporaries used to sit around and top each other’s obscure references.  It’s as if this collaborative/competitive process has been turned into a poetic monologue.  I don’t know whether the Emperor with New Clothes is part of the pageant.  I’ve quite enjoyed reading the book, but don’t find it compelling and am not sure how rewarding it would be to give it hard work.  It lacks his earlier beauty, and without this the tone is more problematic: it’s erudite (of course) and humorous but also mannered, seen-it-all, conservative, irritable, seeking refuge in elaboration.
Hill’s own description of Clavics was interesting: like iron spikes sticking out of a blasted landscape, an Anselm Kiefer one, and Kiefer was interested in Paul Celan…  But this made me contrast the way Celan’s poetry draws me in, with the way Clavics doesn’t.
I was able to inspect a cross-section of GH fans, as I stood outside the venue to hawk a friend’s unused ticket.  A high proportion of men on their own; ditto of Hill-friendly black clothes; mostly more-than-averagely intense.  They were nice about me trying to sell them the ticket, unlike the security guards.  The life of the mind was definitely there in the Purcell Room.  I was surprised by the length of the queue afterwards for book signing; surely an activity Hill would despise.  I’ve just looked on eBay where there’s a signed copy of Clavics available for £59.99.
Here’s Clavics no. 19, which feels less fragmentary than most.  (Where the words are spread out, the letters should be, to make the pattern work; but I don’t know how to do that.)
Into life we fell by brute eviction:
What prize brutish joy; what price compunction?
To feel by trust
Most things ill-won,
Ill-held; even
Your perfection
Gross in its mistiming.
In the dead mist
The fleet sweeps past, Invincible, others,
Derfflinger, Grosser Kurfürst; it is a dream
Of undreaming,
Chaste, all weathers.
The journal ends
Here in its fronds;
Oblivious    the     calm
Jolt of a wave.
That is an odd world from which to derive.
You may call ecrased a deep-whelmed acclaim.
Forgo blaming
On the loss of Empire the spent compère.
*******
You look at the thing; you think, Not today.
Inopportunist    Mechanics
Adjust   it   otherwise
Write as on slate.
Yet   I’d
Concede
Sensing the bite
From the deep-laden rise
Of the word my thrill; as sonics
Are to spheres where surely strange gods deploy.
‘Ecrased’ isn’t in the SOED; in French, écrasé means overcome, overwhelmed.  The Battle of Jutland links the ships (that bit was easy).  I haven’t even tried to probe the rest.  There’s plenty on the internet about Hill and Clavics; I enjoyed Rob Mackenzie’s two pieces, on obscurity and on tackling Clavics no.1 with a bottle of Shiraz.  Clavics is published by Enitharmon.
Posted by Fiona Moore at 19:21