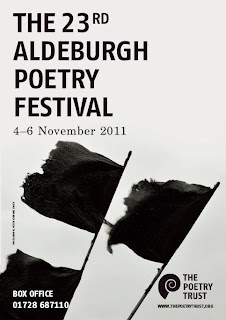 1.  Timing.  Early November, the first full weekend of dark afternoons: its grimness is wiped out by a bright glow in my diary.  Could there be a better time for a poetry festival?  The programme is here. 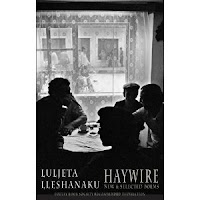 2.  Unpredictability.  First: the poets I wanted to hear, but never thought I would. This time it’s Kay Ryan, the one-off American poet whose Odd Blocks has just been published by Carcanet.  (Last year it was Marie Howe.)  Second: the ones I knew nothing about, and don’t know I want to hear until I do.  Albanian poet Luljeta Lleshanaku, who grew up in the weird, isolated totalitarianism of the Hoxha regime and has just been published by Bloodaxe, may turn out to be one of these.  Third: the talks.  Poets bring their own eclectic interests to Aldeburgh.  I’m especially looking forward to Robert Hass on the haiku masters.  I know next to nothing about haiku, and it’s time to find out.  Hass is also talking about Czesław Miłosz, whom he’s translated - the blurb for this talk makes it sound fascinating. 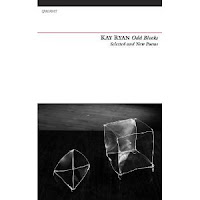 3.  Predictability.  First: the mix of events - readings, talks, interviews; and close readings where a poet spends 15 minutes looking at a favourite poem by someone else.  It’s because of Aldeburgh that I knew about Kay Ryan: last year John Glenday gave a close reading of a poem of hers, which sent me straight to the Poetry Library.  Second: the modest way things happen - poets here aren’t brought on stage to be garlanded with past awards like prize cattle at a Suffolk agricultural fair.  There’s usually a theme or two, but in a relaxed way: this year we have Scottish island poets, and the 21st century poem. Third: the Americans - see also Unpredictability, but what’s predictable is the presence, every time, of a couple of seriously good ones.  Ryan & Hass in 2011.
4.  Free events.  14 this year - talks and close readings by Fleur Adcock and Jane Draycott, Australian Chris Wallace-Crabbe, nonagenarian Fergus Allen, young poets Emily Berry and Helen Mort, and others.  When planning in advance, one thinks: no need to plan everything in advance.  When the time comes, these events tend to be more tempting than a coffee in the High Street.  Or lunch, which one can eat on most other days.
5.  Sea.  There every year, coming very slightly closer.  Different every time.  And every day: last year on the Friday afternoon I walked along the beach in a heavy sea fog.  Next morning, we ate porridge on the sea wall in the sun.  Aldeburgh High St runs parallel to the sea front and many of the holiday cottages are jumbled up between there and the sea, which one can hear at night when lying awake…
6.  Jubilee Hall stage.  The main venue is a small theatre, but with a village hall feel.  On stage, trestle tables piled with books form the backdrop to all events, accessorised by towers of cardboard boxes with WORDS written on them.  In between events, everyone gets up on stage and browses / talks / buys.
7.  Poetry Paper.  This free paper is like no other: full of interviews, poems, learned articles, sound bites…
8.  Aldeburgh the town - High Street, sea front with fish stalls and boats and odd buildings, the fish and chip shop, the ice cream shop, pubs, cafes, bookshop, walks, meeting people one knows and doesn’t know.  It is always very friendly. 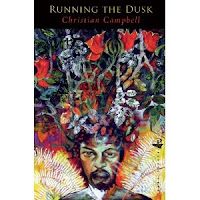 9.  Aldeburgh 1st collection prize.  Last year’s winner gets to read this year: Christian Campbell, whose book Running the Dusk is published by Peepal Tree Press.  4 of the 5 books on the 2011 shortlist are from small publishers.  Looking at the list of past winners, quite a few of those are too; and there have been plenty of female winners.  And not counting Derek Walcott, how often does a black Caribbean poet (Campbell is from Bermuda) win a poetry prize?  We need prizes like this one, to reflect and project the best of what’s out there, both people and presses.
10.  The slightly scary thing is nothing to do with Halloween, and is only scary for me, Jocelyn Page and Luke Yates.  We’ll be the three participants in the Masterclass, the annual on-stage workshop in the Jubilee Hall chaired by festival founder Michael Laskey and this year led by Jane Draycott.  9.30 on Sunday morning...  Each of us three will workshop a new draft poem in front of the audience, who will have copies of the poems and get a chance to comment.  I have no idea what people will think of mine.  But that’s the point of workshops - to find out.

11.  Now for the potentially very bad thing.  Will this year be the last?  The Arts Council will from early 2012 stop all its funding for the Poetry Trust, who run the festival with a tiny team.  (I said what I thought about this in an earlier post.)  The PT are trying to raise funds to continue.  I’m told they won’t know enough by November to speak about the future. This festival offers so much in two days - I've nowhere near done it justice here.  The alternative to Aldeburgh 2012 is unthinkable.
***   ***   ***   ***   ***   ***   ***
While on Suffolk: there is going to be an event remembering / celebrating W G Sebald at Wilton’s Music Hall in London on 14 December.  Tickets are still available, but I don’t suppose they will be for long.
Posted by Fiona Moore at 19:39