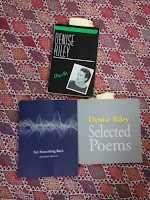 **This was in the pre-Poetry Archive era; you can read and hear several of her earlier poems there.  It’s offline this afternoon but I think the poems include ‘Dark Looks’ and another favourite, ‘Shantung’.  Also, see here for a podcast of her reading ‘A Part Song’, the much-admired long poem from Say Something Back.  Riley was in volume 10 of the Penguin Modern Poets.  She had books before her Selected, some published by Virago (see Dry Air in the photo – I was delighted to find this at the Blackheath Amnesty International book sale).  Several years ago I searched for them in the Poetry Library but they had mostly gone missing.
Posted by Fiona Moore at 18:51