Open Letter to the Poetry Trust

I cancelled my Friends standing order, at your request, with a heavy heart.  At least I think I did: there’s no record of the cancellation in my account or of the order itself except that it was last paid, appropriately, in November.  If the money arrives again next November, that’s too bad…  Electronic bank transactions aren’t much good for metaphors so I can’t help thinking that a cheque will fall on the doormat at your Halesworth attic, the letterbox clatter echoing in the emptied office.

Thank you for going ahead with the 2015 Festival despite accumulating financial and other worries.  Everyone who was there, packing out Snape and Aldeburgh rooms of all sizes, will have been grateful for that.  Of course there were rumours.  One of the things being said was that you’d been encouraged by your sponsors to risk the ambitious move to Snape, and perhaps they were now letting you down.

When you made your announcement in December there was a predictable outpouring of dismay, lamentation, support etc.  From signed-up Friends and supporters but also from people who don’t go to Aldeburgh, or only occasionally, but still value the festival as a vital part of UK poetry life.

Since then it’s gone quiet but that doesn’t mean people aren’t still thinking and talking about it: what’s going to happen?

I haven’t tried to contact anyone for inside knowledge.  I know that you the trustees (and maybe some of the former staff?) are being careful about what you say – fair enough, any comments would spread quickly.  There is a rumour going round that there either won’t be a festival at all in 2016 or it will be very informal, symbolic, enough to prevent a total break in the 27-year-long chain.

Before looking forward I want to go back – to your annual report & accounts for 2014/15 (up to March 2015), see here.  On the face of it, despite the loss of one major donor (the Garfield Weston Foundation) and box office income not rising as hoped, your financial position looks OK, with £270k income and £265k spend over the year… except that any organisation (especially with low reserves) relying on Arts Council Grants for the Arts funding and/or charitable donations is constantly on the edge of a North Sea cliff.

While showing appropriate caution about future funding, the plans suggest a certain optimism.  Your report (p8) set out an ambitious fundraising programme, including a public appeal and a search for major donors to complement Grants for the Arts money.  This is matched by the ambition of the artistic programme built around the Festival, which includes:

A year-round programme of events and projects …a re-introduction of the Schools programme, an increased youth offer, a move towards partnerships, and a widening of access to the benefits of contemporary poetry, delivering a year-round live and digital programme, creative education opportunities, courses, prizes and publications.

Clearly this didn’t work out for various reasons, perhaps chiefly a combination of staff changes and over-ambition?  I don’t know enough about this and it’s easy to be wise after the event.  A business guru would say: stick to your core competence, which in this case is –

Other near-integral elements, part of the Aldeburgh brand, are the Aldeburgh Eight (though as a former participant I’m biased) and the First Collection Prize.  The rest sounds positive but isn’t core though I’ve heard that the work you did with English teachers, helping them teach poetry in schools, was really good.  Someone should be doing that.

By now you may be asking, why am I writing to you?  Hardly to say, stick to the Festival, since I’m sure you’ll already have worked that out.  I think I’m writing into what has felt, since Aldeburgh in November, like a vacuum.  I realise you must have decided that you need quiet time for your strategic review, without intrusion from the poetry crowd: fair enough.

But nature abhors a vacuum.  I can’t fill this one so I’m sending a letter into it.  It’s a plea for communication.

Do you know how much goodwill there is out there, and might it be a good idea to have it working for you /with you?  If you could consult and involve us in your decisions – or at the very least, update us on how your thoughts are evolving – you’d be repaid by Friends, audiences and supporters feeling some ownership of the future Festival and whatever shape it takes.

This blog should be illustrated by a photo I failed to take in November, of a notice on the sea side end of the Jubilee Hall in Aldeburgh saying that renovation plans were being developed (which at the time made me wonder if a return there might be an option).  Anyway the Jubilee Hall website is now announcing public meetings in February, with presentations and discussion on the future of the Hall.  One building can’t be compared to a whole, complex Poetry Trust, but still it seems like a good idea. 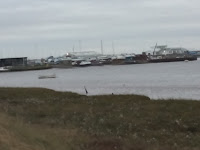 the local history signs by the sea path south of Aldeburgh towards the Martello tower.   Fishing families used to have houses there which would get flooded during sea surges.  They knew about this so their houses were constructed accordingly.  They left the doors open on both sides so the sea washed through and back again.  I’m not sure what this is a metaphor for (there’s got to be one!)  Perhaps it’s about human / festival adaptability.  Or about letting us all in.
My Aldeburgh friends (ie the ones I always go with) and I are thinking of booking a stay in Aldeburgh around festival time.  If you’re not there we’ll hold our own festival under the stars, by/in the sea, on the marshes and in the pub.  Perhaps others will come and do the same.  But we hope very much you will be there too.