‘Ashes and Diamonds’ - following a quotation


Andrzej Wajda made Ashes and Diamonds in 1958, in  post-Stalinist Poland. It is after a novel of the same name by  Jerzy Andrzejewski, written in 1948, whose action took place  on 8-9 May 1945, as the second world war was ending.  Peace  arrived with civil war in its arms.  I saw the film in a Polish  cinema in the 1980s.  It had escaped significant censorship,  probably because Polish censors tended to concentrate on  words rather than visuals. Bureaucrats need to be able to  produce reasons, however spurious. As Wajda said (in his  unpublished autobiography, according to some old BFI film  notes I’ve got), there’s “something ungraspable, between  sound and picture, that constitutes the soul of film”.
The novel was published too, though.  My Polish state publishing company edition had to be thrown out a few years ago because something was eating it (censoring bookworms?  too small to see, but whatever it was had a taste for 80’s East European glue).
Like most Polish films about the war, Ashes and Diamonds ends tragically.  There's a good account of it by Derek Malcolm of the Guardian, here. I used to watch old films on my black-and-white, crackly Polish TV.  Not at all like British films about the war.  One should not assume that heroes, or hope, will survive. That would be unrealistic, from a Polish perspective, given what happened there during the war.  Also because of afterwards; dying, loss of hope, were the outcomes that made sense.  It felt like that in the mid-80s, after the suppression of Solidarity. 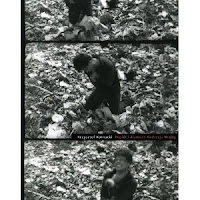 The title that film and novel share comes from a play ‘Za Kulisami’ (‘Backstage’) by the mid-19th century Polish poet Cyprian Norwid.  There's more about him here.  I think it’s from a verse prologue to a play-within-a-play.  There’s a scene near the end of the film where the hero Maciej (played by the charismatic Zbigniew Cybulski, known as the Polish James Dean) and the girl he’s just fallen for, Christina (Ewa Krzyżanowska), take shelter in a bombed-out church.  She deciphers a memorial inscription on the wall; the writing gets fainter but Maciej knows it by heart, tells her it’s by Norwid and finishes it for her.  Listening, we understand that Maciej IS the person being addressed in the poem.  In Polish history, one century can often speak for another.  The scene’s on YouTube, here.  I did try to embed it but lost the whole post and had to start again...

The words they read, being from a play, are not in my Norwid Selected, which I also bought when living in Poland – probably after seeing the film.  I’d never seen them written down until a couple of weeks ago, the first time in this age of the internet that I’d thought of looking.

I can’t find it in English, apart from the subtitles on the film clip, so have done a version, still work in progress, for a translation night at the Torriano this Sunday.  Do come if you're within range, and bring a translated poem to read.

Time and again you flare up, firebrand
with blazing embers flying here and there;
you burn, not knowing whether you’ll gain freedom
or lose everything that you hold dear.

What will be left, only ashes, and chaos
hurling you into the void? – or will there be
a diamond underneath the ashes – starlike,
first dawn of everlasting victory!...

The torch is 19th-century, if not medieval – a length of wood dipped in pitch – I can’t make that work.  I have turned a simile at the beginning into a metaphor and taken other liberties.  I had remain / dawn as the end-rhymes in the second verse, but changed it; ‘or will there remain’ was clumsy, and if the emotion is in the sounds, then the poem prefers full rhyme.  I can’t do abab, as in the original.  Maybe I could if I were on a desert island.  Should one aim to replicate the feminine line-endings, which the Polish has throughout, in English?  I don’t think it has the same effect.  But I’ve changed ‘like a star’ to ‘starlike’ to add another one.

Norwid lived his adult life as an exile in Paris, usually impoverished, often lonely and ill.  Poet, painter, sculptor, novelist, playwright, he wasn’t much appreciated during his lifetime.  He has been compared to Emily Dickinson, whose contemporary he was – not that either of them would have known.  One thing they have in common is punctuation.  They also share a sort of gnomic mix of simplicity and complexity.  Norwid’s work was set much more in the wider world.  I’ve been translating a couple of other poems by him – apart from the generic problem of turning something 150 years old into English, they are difficult because they are odd, and it’s hard to gauge oddity in a foreign language.

I’ve just had another look at the film clip, and there’s something odd about the inscription on the church wall that Christina reads from.  It doesn’t have line breaks, and seems to miss some of the text out and have extra bits.  Like Christina, I can’t make it all out…
Posted by Fiona Moore at 18:01