That phrase comes from the subtitle of The Ground Aslant, an anthology published by Shearsman last year.  It tells us that we needn’t fear finding a regression to the pastoral inside this book.  The 16 poets also approach landscape more as psychogeographers than ecopoets: these British writers seem to take it for granted that landscape is a co-product of humans and nature.  They all use form and language in more or less experimental ways. 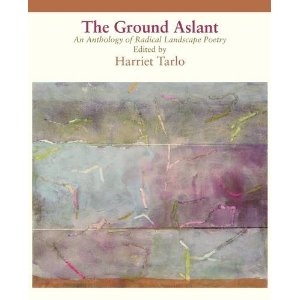 The editor, Harriet Tarlo, provides an introduction that’s interesting and helpful. You can read it online here. She places the work in a modernist tradition going back to Basil Bunting and Ian Hamilton Finlay, to Lorine Niedecker and Charles Olson.  Although none of the contributors are published by mainstream presses, Tarlo says: “Landscape poetry often challenges the divide between experimental or innovative and traditional or mainstream which has haunted British poetry… since the nineteen-thirties.  The challenge emerges from the fact that, however innovative, this work.. clings to its hold on the local and physical world”.
Indeed it often seems, in this book, that landscape is running through the language, and language through the landscape.  After reading for a while, when arriving at a new poem or poet, I started to feel that I was orientating myself: which I suppose one does anyway in poems, but the process becomes more explicit when they are set in landscapes.  Here’s the top third of Frances Presley’s ‘Triscombe Stone’:
Which wood are we in?  Maritime   to  scan   five   newspapers  and
sessile oak.  No, which wood are   discovered for the first time that
we in?  I  thought  it  was  scrub   we only  had  eighty  years  left,
oak.  Triscombe  stone half fixed   the   pink   columns  of   the  FT
in concrete,  a hazard  to cars at   provided the most accurate and
the meeting point,  in a declining   factual  information,   and  were
sun.  It  is  thought  to  be from   most  likely  to  provide  source
the  Bronze  Age.    The  ancient   references.  She says  that only
of days  lowers  himself  onto its   two degrees  of warmth  makes
Various sorts of reader orientation are going on in this monologue: the physical location, its human history and natural elements; the eco-politics of the poem; the humour; the stand-point of the narrator; how to orientate one’s reading, down first, across, or both at once; how all these relate to each other.  There are more if one reads the whole poem (the end of the first column does read up to the beginning of the second, newspaper style).
Now I’m going to confess that when I first opened the anthology, in rural Ireland last summer, I found some of the poetry hard to read.  It could have been that I found it difficult to absorb other people’s landscapes, while learning a mostly new one myself.  Also, maybe I wasn’t in the right mood for the serious, intense tone of some of the poetry; or for its denseness and complexity.  I remember finding some of the specialist vocabulary, which some contributors use, a bit self-conscious.
Anyway I put the book aside and now, in winter London, have enjoyed it very much.  It repays close and repeated reading: for how the poets combine form and content; for the concentrated detail of observation; for the comedy, irony and bleakness extracted from the juxtaposition of landscape and human. Some of the extracts I most want to quote convey the physical feeling of being in a landscape.  In ‘The New Bridge’, Zoë Skoulding writes:
the lines of the landscape
run through me to somewhere else
And here’s an untitled piece by Tarlo:
my self
a hair-hooded
shadow
over bright grass
into     twisted
bark
in eng land
The centring of this piece (against current norms of good practice) mimics the figure at the centre of a space.  The splitting of ‘eng land’ might make one think of ‘eng’, German for ‘narrow’.
Another thing I’ve enjoyed is poems that splice landscape and thought patterns, as in Peter Riley’s ‘Vertigo’:
Moving out of the tree border into the top grasslands.
This is the earth, and this is us here very close to it,
watching the great valley below, everything clinging to the ground
small black ants on my arm butterflies here in the grass
I’m working on a statement of political hatred black
flies gentle breeze clinging to the hillside…
Helen MacDonald seems to have inherited some of his wry humour.  I found her poems some of the most exciting in this book.  They are dense, and their syntax is often dizzying.  The brilliantly observed and felt detail gives them a kind of impartial authority.  Here is part of ‘Monhegan’, subtitled ‘or: why I am not a painter’:
First, second, and third year gannets
distinguishable by the distribution of hues.  The patch of black
falls into the open eye like the bird into surf and sets up a ratchet
mechanism the wind and land dries the cornea and the sea’s
slack tangent catches you like a tune & you turn, to sleep surely
in blue and red with salt in your hair…
Some poets are represented by sequences, or extracts from sequences.  In ‘Zeta Landscape’, Carol Watts addresses not an alien planet, as one might expect from the title, but the economics of hill farming.  There is alienation in this theme, and in the language; according to the anthology intro, Watts describes this as “lyric nature poetry put under pressure”.  Here’s the beginning of ‘7’:
do these add up  are they outside subsidy  or
logged  in magnitudes of adjustment  the value
of a warm animal  less  than the cost of quantifying
its warmth  or inspecting animation  each sixteen
days  the collisions  of neighbouring hillsides  result
today  in corpses by the river  seven blown  fleeces

I wanted to quote one of Mark Dickinson’s poems from ‘The Speed of Clouds’ but its grid form caused problems.  You can read some of them here.  I loved finding my way along the narrow columns in Zoë Skoulding’s ‘Through Trees’. This is the beginning of the second poem:

trees print on skin
a birch kiss  burns
shadow   on   your
epidermis  flushed
by  wind   or   sun
peeling      slightly
scratch    off     to
reveal the winning
answers all correct
Thomas Clark’s sequence ‘The Grey Fold’ runs for 12 pages; each page contains a beautiful miniature poem, becalmed in white space.  I’ll end with the first of these.
lifting your eyes
take the small voyage
out to the horizon
and back again
Note: the painting on the front cover is Poll Salach by Julia Ball.  I googled this and found it’s a place name in the Burren, Ireland, though it’s not on my OSI map of the Burren.  I then found the photos: copyright Dr Charles Nelson and licensed for reuse under the Creative Commons Licence.
Posted by Fiona Moore at 20:13